Review: Welcome "The Strangers" into Your Imagination 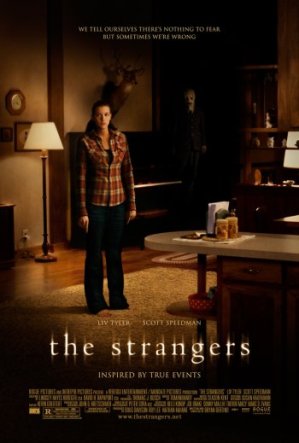 The subject of this movie review is The Strangers, a 2008 horror film from writer-director, Bryan Bertino.  The film stars Liv Tyler and Scott Speedman as a young couple staying in an isolated vacation home, where they are terrorized by three unknown assailants.

The film follows Kristen McKay (Liv Tyler) and James Hoyt (Scott Speedman), who are returning from a friend’s wedding reception.  They decide to stay in a remote summer vacation home owned by James’ parents.  Instead of feeling joy, their minds are on a new complication in their relationship.  Shortly after arriving, someone shows up at the door asking, “Is Tamara here?”  Not long afterwards, Kristen and James find themselves confronting a masked trio that begins to taunt and torment them in a series of acts that grow increasingly cruel.

The Strangers is not only a horror movie, but also a mystery thriller, a suspense movie, and a crime film.  It especially recalls the scary movies of the 1970s.  Because “the strangers” (or intruders) stalk Kristen and because they use masks to hide their identities, this film often seems like a slasher movie.  It particularly bears a resemblance in tone and execution to John Carpenter’s 1978 slasher classic, Halloween.

This heady mix of mystery, thrills, and suspense entitled The Strangers maintains an effective atmosphere of creepy dread and spine-tingling anticipation.  Writer-director Bryan Bertino smartly uses sound and the interplay of artificial light and naturally-occurring darkness to enforce in the movie’s audience that something dangerous is there, unseen, but definitely there.  The Strangers has visual and thematic cues that evoke earlier movies about home invasion or with scenes depicting a home invasion, such as A Clockwork Orange, The Last House on the Left (1972), and Panic Room.

It is the suspense and terror, not the bloodshed and gore, which makes The Strangers such a good film.  The fear seems so real that it is surreal, and the movie has a dream-like quality, as if we were watching something on the edge of our consciousness, about to intrude on us as we doze off.  Ultimately, The Strangers is just fun to watch.  It is a reminder that the horror genre still has the capacity to seem fresh and new, regardless of production budgets. Even without computer-generated images and effects, horror can offer something delightfully surprising that can engage our imaginations or even blow our minds.  The Strangers is the new thing not afraid to use the old tricks that are timeless in their effectiveness to scare us.