Review: "Octopussy" Not Quite an All Time High in Bond Franchise 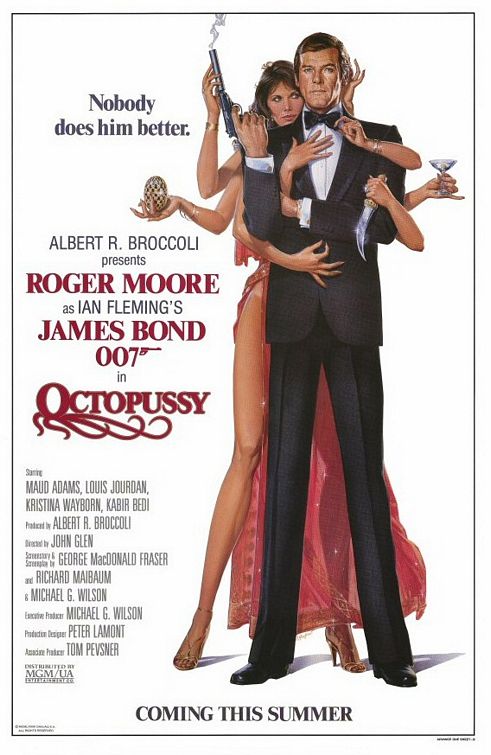 This year is the 30th anniversary of the release of Octopussy, the 1983 James Bond film and British spy drama (specifically June 6, 1983).  Octopussy is also the 13th film in the James Bond film series, and the sixth time that actor Roger Moore portrayed fictional M16 agent James Bond, codenamed 007.

In Octopussy the movie, 007 uncovers a terrorist plot tied to an international jewelry smuggling operation.  This is not a great Bond movie, but it is one I greatly enjoy, although I am not sure if I have watched it since it first appeared in movie theatres.

British agent 009 dies in West Berlin after being stabbed.  He is found wearing a clown costume and carrying a fake Fabergé egg.  James Bond, Agent 007 (Roger Moore) follows the trail of the fake egg to an auction of a real Fabergé egg.  There, Bond encounters Kamal Kahn (Louis Jourdan), an exiled Afghan prince.  Bond is attracted to one of Kahn’s associates, Magda (Kristina Wayborn), a beautiful young woman with a tattoo of a blue-ringed octopus on her back.

Magda leads Bond to the mysterious Octopussy (Maud Adams), a wealthy woman who leads an octopus cult, of which Magda is part.  Now, Bond must discover the connection between Octopussy, Kahn, and General Orlov (Steven Berkoff), a renegade Soviet general, and why that connection may mean a deadly attack on NATO forces in Europe.

The James Bond movies in which Roger Moore played 007 are not like other Bond movies, especially the latter half of Moore’s tenure.  Moore always seems like he’s having a good time, half-smiling and with a wink and a nod to the audience.  The audiences at the time of these films initial theatrical releases apparently enjoyed Moore as Bond, as the movies were successful.

Octopussy, however, is strange, and not just because of the salacious title.  First, the subject matter – the threat of an act of nuclear terrorism, and especially the threat of nuclear war between the United States and the Soviet Union – was quite serious at the time because of its real world implications.  The movie is fairly violent, with several killings, and Bond even shoots a young soldier (who looks as if he is little more than a kid in his early 20s), point blank, right in the middle of his forehead, killing him.

At the same time, Octopussy is often humorous and sometimes plays like a spy comedy.  There is over-the-top silliness (like the Tarzan yell), some tongue-in-cheek humor (the gorilla and clown costumes), some gallows humor (the killing of a man in a clown costume), and some satirical humor (in the form of General Orlov, who seems as if he belongs in the film, Dr. Strangelove).

Octopussy is also a good-looking movie, especially because of the exotic Indian locales, in which much of the film was shot.  The interiors of Kamal Kahn’s “Monsoon Palace” and Octopussy’s hideaway are like that of high-end, luxury hotels.  All the costumes, from Bond’s attire and the military uniforms to the slinky and revealing wear of Octopussy and her harem, are eye-catching.

Octopussy’s villains aren’t great Bond bad guys, although Louis Jourdan’s suave turn as Kamal Kahn is a nice odd note.  But odd is the way to describe Octopussy, and that may be why it has a special place in my movie lover’s heart.  As a recommendation, I’d say, “Hell, see it for the girls and for Octopussy herself (nicely played by Maud Adams).”


Posted by Leroy Douresseaux at 9:05 AM