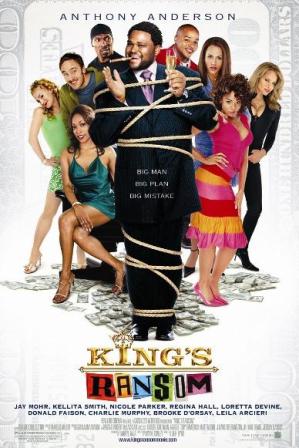 The subject of this movie review is King’s Ransom, a 2005 comedy from New Line Cinema.  Starring Anthony Anderson, the film follows a despicable businessman who arranges his own kidnapping as a way to trump his gold-digging wife’s plans for his money, only to see the plot go awry.  King’s Ransom was poorly received by professional film critics, but I like it anyway.

In King’s Ransom (a kind of loose take on the 80’s comedy hit, Ruthless People), Malcolm King (Anthony Anderson), the owner of King Enterprises, is a successful and wealthy man, worth millions of dollars, but he’s also an A-#1-asshole and jerk.  He’s made a lot of enemies, from overworked and under-appreciated employees to his soon-to-be ex-wife, Renee King (Kellita Smith).  He is very concerned about his messy and likely expensive divorce, in which he may have to give up at least half of his wealth to Renee, so he devises a plan to keep his money out of her hands.  With the help of his mistress, Peaches Clarke (Regina Hall), Malcolm plots his own kidnapping in order to secure a fictitious ransom of $10 million – money he can keep away from his wife.

Malcolm, however, isn’t the only one with kidnapping him in mind.  Bitter that she wasn’t made a vice-president at King Enterprises, long-suffering employee, Angela Drake (Nicole Parker), cooks up a half-baked kidnap plot, but a dimwitted, down-on-his-luck, local bumpkin named Corey (Jay Mohr) is also plotting to kidnap Malcolm.  And it wouldn’t be a three-ring circus if Renee, with the help of her tongue-tied lover, didn’t have her own snatch and grab Malcolm plan go awry.

King’s Ransom was nearly dead on arrival when it opened in theatres this past spring, and it, of course, received awful reviews from movie reviewers.  However, the film is a comical and occasionally side-splitting laugher full of dumb jokes, bawdy humor, and low brow comedy, which is was likely deliberately written to be.  King’s Ransom is not great slapstick (and the timing seems a little off), but it works because the cast tries like heck to make it funny.  They succeeded; King’s Ransom is funny as hell.  I must repeat: it’s dumb, dumb, dumb again, but it’s supposed to be dumb, but funny, and it’s hilarious.  An urban comedy, it’s three times better than Soul Plane, but not as good as the Barbershop movies or Malibu’s Most Wanted.

Anthony Anderson is a great comic actor.  He’s as good as members of the so-called Frat Pack like Vince Vaughn and Jack Black, and is way better than Owen and Luke Wilson, but he won’t get the kind of primo movie parts they do.  He’s just a funny guy, and his acting credentials show even in a simple-minded film like this.  Almost all the cast shines, particularly Charlie Murphy (Eddie’s brother and a supporting player on “The Chappelle Show”), but Regina Hall stands out amongst the supporting players.  She is superb at playing character roles in comedies.  I hope that like Anderson, her skin color doesn’t keep her from getting at least one meaty comedy role per year.