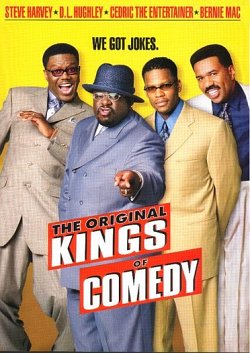 The subject of this movie review is The Original Kings of Comedy, a 2000 concert film and documentary from director Spike Lee.  This stand-up comedy film featured Steve Harvey, D.L. Hughley, Cedric the Entertainer, and Bernie Mac, who at the time, were probably the four major African-American stand-up comedians.

First, I must note that I liked half this movie – the half with Bernie Mac and Cedric the Entertainer.  I like D.L. Hughley as a political and social commentator, but not so much as a stand-up comic.  I have mixed feelings about Steve Harvey, and I’ll leave it at that.

For two years in the late 90’s into early 2000, comedians Steve Harvey, D.L. Hughley, Cedric the Entertainer, and Bernie Mac toured the United States in a comedy show called “The Original Kings of Comedy.”  Director Spike Lee (Malcolm X) captured a two-night performance by the “Kings” in Charlotte, North Carolina on digital film, which became the documentary/concert film, The Original Kings of Comedy.

All four of the performances have film and television backgrounds in addition to their stage work, but they are best known to and most liked by urban i.e. African-American audiences.  In fact, the huge success of the concert tour so surprised mainstream i.e. white news media that the tour was the subject of numerous stories.  Those writers expressed shock at how the Kings played to packed houses, but there wasn’t really a secret to their success.  Tickets prices were cheap (usually around 10 bucks), and tours of King’s were kind of geared toward the so-called urban audience are rare.  Some concert venues consider large gatherings of African-Americans a security risk and demand exorbitant insurance coverage from tour promoters.

I can only hope that the Charlotte shows were not indicative of the tour as a whole.  Much of the performances were thoroughly dry and not funny.  It’s hard to chose between who was worse - tour “host” Steve Harvey (of TV’s “The Steve Harvey Show”) or D.L. Hughley (of TV’s “The Hughleys”).  The audience seemed to like them.  Maybe it was a black thing, or perhaps a certain “class” of black thing – not so monolithic, after all, eh?

Cedric the Entertainer and Bernie Mac were hilarious, especially Mac.  They are gifted both as comedians and storytellers, something that is important for all the Richard Pryor wannabees to remember.  Pryor just didn’t tell jokes; he told hilarious, often uproarious, stories.  Many of the profanity junkies that currently pass for comedians would do best to understand what made Pryor so funny and why he enormously crossed over to white audiences.  Cedric and Mac are funny storytellers, and their humor, laced with tales about black folks, actually reaches to a larger segment of the black population.  In fact, a lot of people from different backgrounds can relate to Bernie’s tales, which is why he has the most diverse work history as an entertainer of all the “Kings.”

Much of the comedy here deals with black culture, black folks, black people’s habits, black people who grew up in the 70’s versus young blacks of the 90’s, old school versus hip hop, and, of course white people.  And they deal with white people rather stiffly.  It’s telling that many of the white faces in the audience were not smiling.  Some of the barbs against white folks were mean, and mostly not funny.  When Redd Foxx, Pryor, and Eddie Murphy joked about whites, it was funny and dead on true.  Mac approaches their touch.  The rest of these guys act as if they’d never met a white person.

Lee covers the stage, the audience, and to a lesser extent, the backstage very well – just enough directing not to take away from the main show.  The performances don’t live up to the hype.  I will recommend this to people who want to see the work of a fine entertainer, and that’s Bernie Mac.


Posted by Leroy Douresseaux at 7:15 AM