Review: Ben Affleck Miscast as a Superhero in "Daredevil" 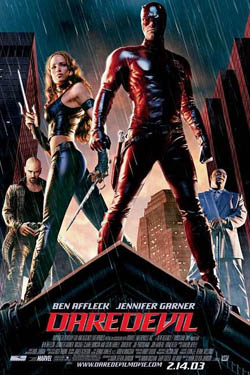 The subject of this movie review is Daredevil, a 2003 superhero film starring Ben Affleck in the title role.  The movie is based on the Marvel Comics character, Daredevil, created by Stan Lee and artist Bill Everett.

The movie’s plot also borrows heavily from elements Frank Miller introduced during his stint as writer-artist on Marvel Comics’ Daredevil comic book series and on several other Daredevil publications.  Stan Lee is one of this film’s executive producers.  Oscar-winning screenwriter Brian Helgeland apparently contributed to the screenplay, but did not receive a screen credit.

Before I get into the heart of the review, I want to start off by saying that Daredevil really ain’t nothing special, and that makes this pretty run of the mill, except for the subject matter.  If you just have to see it (and I can only imagine that comic book fans feel this way as the character originates from a long running Marvel comic of the same title), see it in a movie theatre; otherwise, it may not be worth the time, money, and effort of going to the movies.

Another note before getting into the review:  although he doesn’t get credit, renowned comic book writer/artist and cartoonist Frank Miller just might be the major contributor to this film.  Miller, wrote and drew, the comic book, Daredevil, for Marvel Comics from the late 1970’s to the early 80’s and again wrote the title in the late 80’s with sometime New Yorker cartoonist, David Mazzuchelli, as the comic’s illustrator.  Miller created the character Elektra Natchios (played in this film by Jennifer Garner of TV’s “Alias”), but he did not create all the characters used in this film.

However, the stylistic approach used for the characters comes almost exclusively from Frank’s work.  This movie wouldn’t exist without Frank’s legendary accomplishments; Frank’s Daredevil stories are available in book form as Daredevil Visionaries:  Frank Miller Vol.’s 1-3 and Daredevil: Born Again.  In fact, the 1989 film version of Batman owes very much to Frank’s work on the character in Batman: The Dark Knight Returns, which is always in print.  Miller is also a screenwriter, having penned Robocop 2 and Robocop 3, and his original script (presumably the for second Robocop) will be adapted into a comic book by Avatar Comics.  Now, to the review.

Attorney Matt Murdock (Ben Affleck) was blinded as a child by a chemical that, though it robbed him of his sight, heightened his four remaining senses.  His hearing developed a kind of radar sense that allows him to “see” objects through the sound waves that bounce of those objects.  In the movie, we see the radar sense in operation as a rather cool looking visual effect.  After the accident that blinded him, young Murdock (Scott Terra) trains his body to be as superior as his heightened senses.  After criminals murder his father Jack (David Keith), young Matt grows up to be the costumed crime fighter, Daredevil, prowling the night in a tight, red leather uniform and pounding criminals into dust, literally.  Daredevil don’t play that; he’ll dispense justice to the extreme even if it means that a criminal might lose his life.

Matt meets Elektra, who is an ass kicking, martial arts hottie, and they have a brief romance, but when a crazed assassin named Bullseye (Colin Farrell) kills her father (Erick Avari, The Mummy), Elektra seeks revenge.  In her haste for revenge, she doesn’t realize how complicated matters are and that hanging over all their heads is master manipulator and super crime boss, Wilson Fisk - The Kingpin (Michael Clarke Duncan).

Daredevil is much darker than many super hero movies, almost as dark as Batman Returns, but the former does share the latter’s leather fetishistic theme.  There are lots of really good fight scenes mixing martial arts, boxing, and gymnastics.  Like Spider-Man, Daredevil uses quite a bit of CGI (computer generated imagery) to create human-like figures that can rapidly bounce off walls and scale ceilings while fighting.  In fact, in addition to the “bullet time” technique used so famously in The Matrix, CGI is the only other way live action film can mimic the impossible acrobatics of comic book fight scenes.  Daredevil’s fight scenes are exciting and even thrilling, but many times the CGI is so obviously fake, particularly in the jerky manner in which the CGI figures move.

The story has its moments.  Some of the romantic elements are genuinely sad and sentimental, and some of the drama is palatable.  However, like Spider-Man, the best stuff is during the fights are when Daredevil soars over the CGI New York skyline.

Director Mark Steven Johnson’s love for the material is evident.  He really tried to capture the feel of the comic book in his film.  However, some of the film is awkward, forced and clunky.  The movie drags, and sometimes it races headlong through the story without any substantial development.  There are too many characters, some who, if given more screen time, would have made a better movie.  Jon Favreau, as Matt’s law partner Foggy Nelson, is simply delightful, but Johnson uses him strictly for comic relief.  Farrell strains and overacts as Bullseye; by the time, Johnson reigns Farrell in enough to make Bullseye a good villain, the movie’s almost over.

Suffice to say, Daredevil is an average movie going experience, and might serve as a decent video rental.  It’s special only to comic book fans; most everyone else will find this to be just another movie, unless you’re into the strange and the unusual.  There is a really funk vibe going on with all those leather suits and the rest of the characters’ impressive wardrobe that’s worth experiencing on the big screen.


Posted by Leroy Douresseaux at 7:47 AM