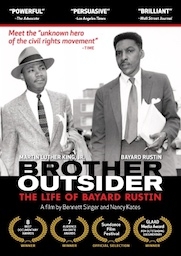 I was recently searching Netflix, looking for a movie I could review in commemoration of the fiftieth anniversary of the March on Washington for Jobs and Freedom (also known simply as the March on Washington).  I suddenly came across the name of a person involved in the American Civil Rights Movement of whom I had never heard.

That man is Bayard Rustin, and he turned out to be the perfect subject matter for this remembrance for several reasons.  One of them is that Rustin was the chief organizer (official title: Deputy Director) of the March on Washington (August 28, 1963), where Dr. Martin Luther King, Jr. gave his famous and historic “I Have a Dream” speech.  The second reason is that there is an award-winning documentary about Bayard Rustin.

Brother Outsider: The Life of Bayard Rustin is a 2003 documentary film from the producing and directing team of Nancy D. Kates and Bennett Singer.  Brother Outsider was originally broadcast as an episode of the long-running PBS documentary series, “P.O.V.” – Season 15, Episode 9 (January 20, 2013).  The film was also shown at the 2003 Sundance Film Festival, where it received a nomination for the festival’s “Grand Jury Prize Documentary” award.

Brother Outsider: The Life of Bayard Rustin presents a broad overview of Rustin’s life.  Rustin was an American leader and activist in several social movements, including civil rights, gay rights, non-violence, and pacifism.  Rustin was born in West Chester, Pennsylvania in 1912, and Brother Outsider follows his life from there.  West Chester is where Rustin began his life as an activist, when as a youth he protested Jim Crow laws.

The film chronicles Rustin’s arrival to Harlem, and his subsequent involvement in communism and later in the anti-war movement.  The film also recounts Rustin’s run-ins with the law enforcement officials over his activities and also how he was monitored by the FBI.  The film discusses Rustin’s life as an openly gay man, which got him into trouble, both with police and with his colleagues and contemporaries.  Of course, the film’s centerpiece is Rustin’s long involvement with the Civil Rights Movement, so the film covers the March on Washington.  There is also an examination of Rustin’s relationship with Dr. King and with his mentor, A. Philip Randolph.

In a recent article for CNN.com, writer and CNN contributor LZ Granderson talks about Bayard Rustin’s marginalization in Civil Rights history, which Granderson attributes to homophobia among some African-Americans and in some segments of the black community.  Running through Brother Outsider is the question asking why Rustin remained in the background of the Civil Rights Movement, never really coming forward.  I don’t think the film ever directly answers that question.

Watching the film and understanding the pariah status that gay people had in the United States for the majority of Rustin’s life, one can understand that Granderson is likely right.  Rustin’s status or lack thereof in Civil Rights history has been affected by his being openly gay.  Rustin was both a “brother,” to many in the social movements in which he participated, but his sexual identity also made him an “outsider.”  For portraying this, Brother Outsider: The Life of Bayard Rustin won the GLAAD Media Award for “Outstanding Documentary” in 2004.  Rustin’s place in history is being restored.  On August 8, 2013, President Barack Obama posthumously awarded Bayard Rustin (who died in 1987) the Presidential Medal of Freedom.

For the time being, LZ Granderson’s CNN.com column, “The man black history erased,” can be read (as long as the article remains posted) here or http://www.cnn.com/2013/08/21/opinion/granderson-rustin-erased


Posted by Leroy Douresseaux at 4:46 AM