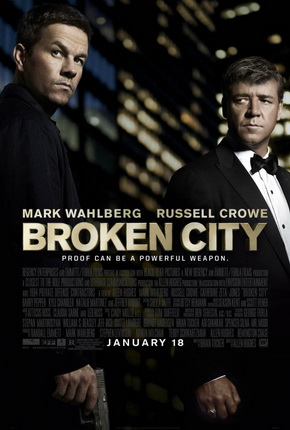 CRIME/DRAMA with elements of a thriller

Broken City opens by revealing a controversial police shooting.  Seven years later, ex-cop Billy Taggart (Mark Wahlberg) owns a private detective agency that is on the verge of bankruptcy.  Taggart gets a big break when New York City Mayor Nicholas Hostetler (Russell Crowe) offers him $50,000 to learn the identity of the man with whom his wife, Cathleen (Catherine Zeta-Jones), is having an affair.

When the suspected adulterer is found shot to death, Taggart thinks that he may have been double-crossed.  However, Taggart’s path to payback takes him into a complicated political conspiracy involving many elements, including a controversial real estate deal, a contentious mayoral election, and police Commissioner Carl Fairbanks (Jeffrey Wright) who despises Mayor Hostetler.

If you found my summary or synopsis of Broken City unusually vague (compared to what I normally offer), it is because I am trying to reveal as little of this film’s plot and story as possible.  I really enjoyed Broken City.  It reminds me of a smoky old Film-Noir movie from the 1950s that focuses on “the city” (such as John Huston’s The Asphalt Jungle).  Broken City is also the first feature film that Allen Hughes has directed without his twin brother, Albert, with whom he has collaborated on such gems as Menace II Society and The Book of Eli.  Allen rarely falters in this solo effort.

Hughes works from an excellent screenplay by Brian Tucker, although I think Broken City would work even better as a novel or television series.  However, Hughes manages to squeeze every subplot, relationship, conflict, and bit of motivation onto the screen.  The result is a cynical tale of big city politics, cronyism, and murder that delivers surprises as if they were mean left hooks.

Broken City is something of an ensemble film.  The viewer enters the world of the film through Mark Wahlberg’s Billy Taggart.  While this isn’t his best performance, Wahlberg proves once again that he is both a fine actor and a true movie star because he will make you want to follow both Taggart’s investigation and his personal journey.

The rest of the cast takes what they are good at doing and distills it into powerful supporting performances.  For Russell Crowe, that means a meaty, masculine, and menacing turn as the powerful Mayor Nicholas Hostetler, a character which feels like a co-lead, but is more of a supporting player.  There is not enough Catherine Zeta-Jones who is smoky and husky as the bordering-on-fatale First Lady Cathleen Hostetler.  The always-superb Jeffrey Wright makes a pugnacious turn as the police commissioner, but the story also needs more of his character.

So that is the glaring flaw of Broken City.  It needs to be bigger in terms of its scope, and it needs to be longer in terms of length.  If any crime drama deserves to run at least three hours, Broken City is it.  Still, this movie was one of 2013’s first really good dramas, and it is hugely entertaining with a killer last act.

Posted by Leroy Douresseaux at 6:37 AM