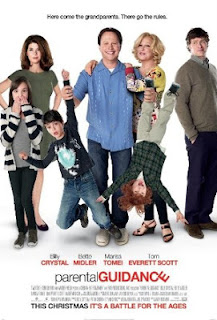 Parental Guidance is a 2012 comedy and family film from director Andy Fickman. The film stars Billy Crystal and Bette Midler as grandparents who agree to look after their three grandchildren whose modern kid attitudes clash with their old-school ways.

Artie and Diane Decker (Bette Midler and Billy Crystal) live in California. Artie is the announcer for the Fresno Grizzlies, until he is fired because he is not familiar with new technology and social media. Diane thinks this is the perfect opportunity to take their daughter, Alice (Marisa Tomei), and her husband, Phil Simmons (Tom Everett Scott), up on an offer to watch their three children, while they attend a conference in Hilton Head, South Carolina.

Artie and Diane fly to Atlanta where Alice and her family live, but they have a few misgivings about the week with the children. In recent years, they have not seen their grandchildren much, and are now practically “the other grandparents.” Plus, Artie and Diane are old school, while Alice and Phil are type-A helicopter parents who micromanage their children’s’ lives and overdo it on building self-esteem.

Artie and Diane are quickly reacquainted with the grandchildren: eldest child and daughter, 12-year-old Harper (Bailee Madison); the middle child, 8-year-old Turner (Joshua Rush), who has a stutter; and 5-year-old Barker (Kyle Harrison Breitkopf), who has an imaginary friend, a kangaroo he’s named Carl. The children think their grandparents are weird, and Barker calls Artie, “Farty.” Now, Artie and Diane have a week to get to really know their only three grandchildren, but that means they’ll have to earn these youngsters’ trust and love.

Parental Guidance starts off as one of those movies created by people who criticize the way other people rear their children. People see sports leagues that give every participating child a trophy simply for participating as a sign of the apocalypse. I have to admit that I find parents that won’t tell their children “No” or “Don’t” in order not to inhibit their creativity, ridiculous. But the republic will survive parents that don’t set boundaries for their children… I hope.

The movie, however, is really about the grandparents, Artie and Diane Decker, and their relationship-building with their grandchildren. The movie follows the struggle of the old school grandparents versus the modern, excessively tolerant parents to a lesser extent. And Parental Guidance is better for it. Who wants to see a movie about two people and their daughter and son-in-law exchanging harsh, snide comments about parenting? I don’t, although I don’t know about you, dear reader.

In some ways, Parental Guidance is mediocre, which is most obvious when Crystal and Midler have to over-act and over-react to make up for flimsy character development. Andy Fickman’s direction is professional and functional, but is also colorless and sometimes uneven.

But the magic in Parental Guidance is watching two grandparents bond with their lovely grandchildren. This film is more sweet than sentimental, and there are moments when the interaction between a grandparent and child seems genuine and honest. The kick-the-can and Turner calls the Giants game scenes make this movie a winner in spite of any blemishes. Talk about a feel good movie: Parental Guidance might be a frothy take on the grandparents and grandchildren dynamic, but it is an irresistible treat.

Posted by Leroy Douresseaux at 6:43 AM