Review: Pixar's "Brave" But Not Bold 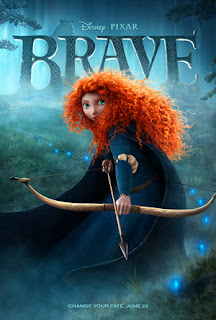 Brave centers on a defiant princess who must fight a curse she brings upon her family. As Pixar films go, Brave is second-tier and not on the level of such films as Toy Story 2, Wall-E, or Up. It is a good movie, but nothing I would call great. In fact, I would not have voted Brave the best animated feature Oscar over a film like ParaNorman and Madgascar 3: Europe’s Most Wanted (which was not nominated).

In Scotland of old, Princess Merida (Kelly Mcdonald) is the 16-year-old daughter of King Fergus (Billy Connolly) of the Clan Dun Broch (Dunbroch). Merida’s mother, Queen Elinor (Emma Thompson), wants what is best for both the kingdom and her daughter. Thus, the Queen clashes with the rebellious and free-spirited Merida who wants to make her own path in life. Skilled at horse-riding and with a bow, Merida does not want to be a lady.

One day, Elinor informs Merida that she must be betrothed to one of her father, King Fergus’ allied clans. Lord Macintosh (Craig Ferguson), Lord MacGuffin (Kevin McKidd), and Lord Dingwall (Robbie Coltrane) arrive with their first-born sons. These sons will compete in the Highland Games for Merida’s hand in marriage. Merida balks, however, and runs away. Desperate to find her own fate, she makes a deal that unwittingly hurts her family. Now, Merida must rely on her bravery and her archery skills to undo a beastly curse.

The first half-hour of Brave is an awkward attempt to introduce characters, themes, plot, and setting, with wheezy music making that awkward even more annoying. The first half hour is the usual raucous, kid-friendly, action-comedy material, which is a Disney trait of turning every family in its films into a nuclear family-like unit. It sort of knocked me for a loop, because it seemed to me that in Brave, Pixar had made its first film that could be described as typical Disney animation product.

It is not until Merida’s second encounter with the will-o’-the-wisps and her meeting with The Witch (Julie Walters) that Brave becomes what it is supposed to be, a fairy tale. When it focuses on Merida’s quest, the magical elements, and the mother-daughter relationship, Brave is at its best. Merida’s younger brothers, the identical triplets: Hamish, Harris, and Hubert are excellent comic relief, but are woefully underutilized.

Everything else about this movie is not really special. The animation is good, although some of the characters bounce like Muppets when they walk or run. The animation’s colors are spectacular, especially Merida’s gloriously red hair and the rich greens of the forests and countryside.

You might be surprised at how deeply Brave digs into the mother-daughter relationship; that brought tears to my eyes. Still, the movie misses the mark of perfection. Brave is mostly a great fairy tale, but partly a Disney-movie-by-committee. That’s a shame, and that is not an Oscar winner (or shouldn’t be).

Posted by Leroy Douresseaux at 11:49 AM