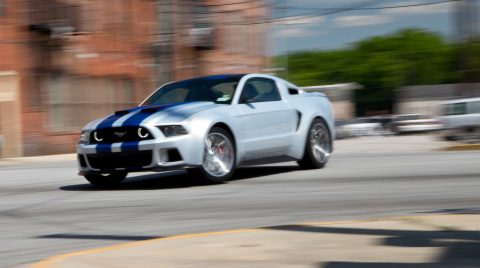 The one-of-a-kind Ford Mustang starring in DreamWork's "Need for Speed."

LOS ANGELES--(BUSINESS WIRE)--Today, DreamWorks Studios’ Stacey Snider, Partner and Co-Chair, and Ford Motor Company’s Jim Farley, Executive Vice President, Global Marketing, Sales and Service, are pleased to announce an exclusive partnership for the feature film “Need for Speed,” which will include significant integration of Ford products, along with extensive media promotion by Ford at the time of the film’s release on March 14, 2014. The announcement coincides with the unveiling of a one-of-a-kind Ford Mustang for the film, during Electronic Arts’ press conference at E3 Expo in Los Angeles later today.

The Ford-designed and created made-for-movie Mustang will be featured prominently throughout the film and become part of the mythology of the movie. The “Need for Speed” Mustang features a custom-designed wide body, unique 22-inch alloy wheels, and larger air intakes to feed the supercharged V8 engine under its classic Mustang twin-nostril hood.

“’Need for Speed’ is rooted in Americana, and when we were casting our hero car for the film, Ford Mustang was the obvious choice,” said Snider. “With its 50-year history in film, the iconic Mustang is the perfect co-star for Aaron Paul. We are privileged to have such an esteemed partner like Ford working with us on this film and look forward to seeing their Mustang up on the big screen next year.”

Ford also provided the production with an F-450 truck known in the film as “The Beast,” as well as another Mustang to serve as a specially designed camera car, which allows the filmmakers to capture car racing action in new and exciting ways.

“Need for Speed” marks an exciting return to the great car culture films of the 1960s and ’70s, tapping into what makes the American myth of the open road so appealing. The story chronicles a near-impossible cross-country journey for our heroes – one that begins as a mission for revenge but proves to be a journey of redemption.

“Ford Mustang is a symbol of freedom and optimism that allows you to be the person you dream of being, making it the perfect fit for this story,” said Farley. “Ford is excited to partner with DreamWorks and Electronic Arts as they bring the epic gaming franchise of ‘Need For Speed’ to the big screen, allowing us to go further with them as they tell their great story on the global stage.”

The movie is based on Electronic Arts’ popular video game series of the same name. It is one of the most successful racing video game franchises in the world, with more than 140 million games sold. The film stars Aaron Paul (“Breaking Bad”), Dominic Cooper (“Captain America”), Imogen Poots (“Fright Night”) and Michael Keaton (“Batman”), and is directed by Scott Waugh (“Act of Valor”). George Gatins and John Gatins developed the story and wrote the screenplay. John Gatins, Patrick O’Brien and Mark Sourian are producing. The Walt Disney Company is distributing the film in the United States and select international territories, while Mister Smith Entertainment is handling distribution in Europe, Africa and the Middle East. DreamWorks’ partner Reliance will distribute the film in India.

“’The Need for Speed’ movie will embody everything that fans of action racing films want to see – hot cars, high-stakes street racing and mind-blowing stunts,” said Scott Waugh, director of the “Need for Speed” film. “The adrenaline-fueled story across America will keep viewers on the edge of their seats.”


About DreamWorks Studios
DreamWorks Studios is a motion picture company formed in 2009 and led by Steven Spielberg and Stacey Snider in partnership with The Reliance Anil Dhirubhai Ambani Group. The company’s recent releases include Spielberg's "Lincoln," starring Daniel Day-Lewis, Sally Field and Tommy Lee Jones. The film has grossed over $270 million at the worldwide box office and was nominated for twelve Academy Awards® with Daniel Day-Lewis winning for Best Actor. Other releases include "Real Steel," starring Hugh Jackman and directed by Shawn Levy, Steven Spielberg’s "War Horse," based on Michael Morpurgo’s award-winning book and nominated for six Academy Awards® including Best Picture, and "The Help," which resonated with audiences around the country and earned over $200 million at the box office and received four Academy Award® nominations with Octavia Spencer winning for Best Supporting Actress. Upcoming films include the comedy "Delivery Man," starring Vince Vaughn, the WikiLeaks drama "The Fifth Estate," and car racing actioner "Need for Speed."

About Ford Motor Company
Ford Motor Company, a global automotive industry leader based in Dearborn, Mich., manufactures or distributes automobiles across six continents. With about 175,000 employees and 65 plants worldwide, the company’s automotive brands include Ford and Lincoln. The company provides financial services through Ford Motor Credit Company. For more information regarding Ford and its products worldwide, please visit http://corporate.ford.com.

In 2014, Ford Mustang will celebrate a milestone anniversary and become the newest member of a very exclusive club – vehicles in continuous production for 50 years. Mustang’s unique combination of style, performance and affordability sets it apart from other sports cars and it’s why the car connects so well with drivers – with a worldwide base of avid fans to prove it. The Mustang attitude of limitless possibilities is universal and enduring, it’s truly part of our cultural fabric and evokes a variety of emotions – freedom, independence and optimism – just to name a few. Fans around the world will be honoring that heritage with numerous celebrations as the original pony car heads into the next 50 years.

In fiscal 2012, EA posted GAAP net revenue of $4.1 billion. Headquartered in Redwood City, California, EA is recognized for a portfolio of critically acclaimed, high-quality blockbuster brands such as The Sims™, Madden NFL, FIFA Soccer, Need for Speed™, Battlefield™ and Mass Effect™. More information about EA is available at http://info.ea.com.

Posted by Leroy Douresseaux at 1:01 PM