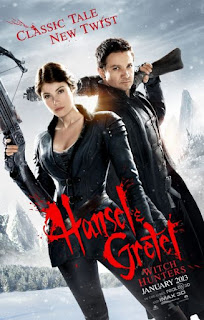 FANTASY/HORROR/ACTION with elements of comedy

Hansel & Gretel: Witch Hunters is a 2013 action, horror, and dark fantasy film from director Tommy Wirkola. The American-German co-production was presented in 3D during its theatrical release. The film follows a brother and sister team of bounty hunters that tracks and kills witches all over the world.

Hansel & Gretel: Witch Hunters introduces a young brother and young sister who enter a gingerbread house and end up fighting horrid old witch for their lives. Many years after surviving that incident, Hansel (Jeremy Renner) and Gretel (Gemma Arterton) are famed bounty hunters who merciless eradicate witches for payment.

One day, they arrive in the town of Augsburgh just in time to stop Sheriff Berringer (Peter Stormare) from killing Mina (Pihla Viitala), a young woman accused of witchcraft. While the Sheriff disdains them, Mayor Engleman (Rainer Bock) welcomes Hansel and Gretel, because he hopes they will find and rescue several children that were abducted by witches and their troll ally, Edward (Derek Mears and Robin Atkin Downes). This will be the siblings’ biggest challenge yet. Muriel (Famke Janssen), a powerful witch, has plans for a special Sabbath known as the Blood Moon. Those plans have huge implications for Hansel and Gretel and will reveal the deepest secrets of the sibling’ past.

Hansel & Gretel: Witch Hunters has a strong current of black comedy running throughout the film. The filmmakers didn’t pretend that their movie should be for children, so the movie is violent and gleefully gory, in ways both shocking and funny. Hansel & Gretel: Witch Hunters mixes the weird Western sub-genre with the hard-charging action-horror film. It’s like Django Unchained meets Army of Darkness.

Jeremy Renner and Gemma Arterton are odd as Hansel and Gretel. They really don’t seem to have screen chemistry, which somehow makes them have a peculiar kind of screen bond. Renner is sullen and grim as Hansel, while Arterton often has her nose in the air, like an upper class bratty girl. Whenever they deviate from that, it ends up being a welcomed surprise and twist, giving the characters a little depth.

Posted by Leroy Douresseaux at 6:39 AM