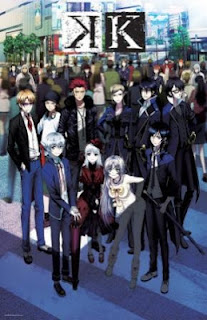 VIZ Media, LLC (VIZ Media), the largest distributor and licensor of anime and manga in North America, celebrates the action and kinetic storyline of one of its newest anime properties – K – at the 2013 Anime Expo, taking place July 4th–7th at the Los Angeles Convention Center in Los Angeles, CA. Now celebrating its 22nd consecutive year, Anime Expo is sponsored by the SPJA and is the nation’s largest anime convention. VIZ Media will host a variety of special activities and panels throughout “K Day,” on Friday July 5th.

Join the English language staff and cast at the celebration, beginning with the exclusive K Episodes 1 & 2 English Language World Premiere at 11:15am in Room LP1. At 12:15PM, directly following the premiere and held in the same room, Josh Lopez, VIZ Media Dub Producer for K, will join the staff and cast in a Behind the Scenes Q&A on the process of bringing K to North America. At the end of the panel, fans will receive an exclusive commemorative Neko character fan.

The celebration continues with a special autograph session with the K English language dub cast from 2:30-3:30pm in the Anime Expo Autograph Area. Each attendee will receive an premium poster to get signed by the guests. The autograph session will be followed by a photo opportunity at the VIZ Media booth (#1501) with K cast and staff, including Johnny Yong Bosch (English voice of Fushimi), and the K cosplayers of ACParadise.com. Attendees that show up in K Project cosplay will receive a special gift. Finally, end the day with a photo op with KANAME☆ at the VIZ Media booth K wall at 5:30pm. Meet this legendary cosplay idol as he brings the cool and suave Fushimi to life.

"K is such a gorgeous and action packed series, we knew it was an excellent choice for a special event at Anime Expo,” says Charlene Ingram, Senior Manager, Animation Marketing. “K makes its Neon Alley broadcast premiere on July 12th, and we're thrilled to give AX attendees an opportunity to meet some of the staff and cast that helped bring K to North America. We are also honored that one of the most renowned male cosplayers in the world, KANAME☆, will be joining us! "

For those who can’t attend K Day on Friday July 5th, the festivities continue throughout the show. KANAME☆ will appear at the VIZ Media booth on Saturday July 6th at 2PM for a special autograph session and photo opportunity, and will appear at the booth for additional photo ops through the show (please check the daily booth schedule). All days of the show, attendees can find the special ACParadise NEKO cosplayer around the show floor to receive an exclusive NEKO bell (while supplies last). Attendees can also stop by the VIZ Media booth to play the King’s Game for prizes – check the daily booth schedule for game times.

K is set in a world where history has taken a slightly different course from the one we’re familiar with and follows the story of a young boy whose life is caught in a psychic war between seven kings. Yashiro Isana, also known as Shiro, is wanted for a crime he has no recollection of committing. He finds himself being hunted by the groups Homura, led by Mikoto Suoh, “The Red King,” and Scepter 4, led by Reisi Munakata, “The Blue King.” While on the run, another young man named Kuroh Yatogami helps him. Will this fated encounter change Shiro’s life forever?

For more information on K and other animated titles from VIZ Media please visit www.VIZAnime.com/k.

Posted by Leroy Douresseaux at 6:55 AM