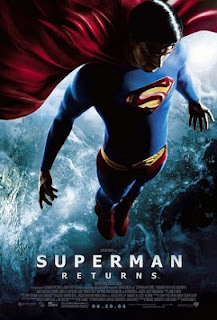 SUPERHERO/ACTION/DRAMA/SCI-FI with elements of romance

To the world at large, he disappeared five years ago, but Superman (Brandon Routh) was searching for the planet of his birth, Krypton. Now, he’s back and so is his secret identity, Clark Kent. Clark returns to the city of Metropolis, where he works as a reporter for the newspaper, the Daily Planet. He discovers that the love of his life, fellow reporter, Lois Lane (Kate Bosworth), has moved on with her life, but still holds a grudge against the man she passionately loved before he disappeared, Kent’s other identity, Superman.

Lois has child Jason White (Tristan Lake Leabu) and is engaged to Jason’s alleged father, Richard White (James Marsden), nephew of Daily Planet editor-in-chief, Perry White (Frank Langella). While Lois claims that Richard, the editor of the Planet’s international desk, is Jason’s father, the child is five years old… Once upon a time – five years ago – Lois knew that Clark was Superman (before he wiped her mind of that secret) and they had an intimate affair. Clark would like to reveal his secret once more and perhaps rekindle their love, but he can’t shake the feeling that she doesn’t really want a relationship with Superman anymore.

Meanwhile, Superman’s bitterest enemy, Lex Luthor (Kevin Spacey), is out of prison and plotting both his conquest of the world and his revenge on Superman. Luthor invades Superman’s North Pole sanctum, the Fortress of Solitude, where he steals advanced technology and alien secrets from Krypton, which he in turn uses in a diabolical plan to recreate part of Krypton on earth. And if the Man of Steel interferes, he has a deadly Kryptonian item that will stop Superman once and for all.

Superman Returns is the first Superman film in 19 years (since 1987’s box office bomb, Superman IV: The Quest for Peace). Superman Returns takes place in the wake of the events of 1981’s Superman II (which saw Superman reveal his identity to Lois and the two have sexual relations). Director Bryan Singer (X-Men, X2: X-Men United, and The Usual Suspects) reuses parts of John Williams score for the 1978 film, Superman: The Movie. He also reuses parts of Marlon Brando’s performance from the original movie as Superman Kryptonian father, Jor-El. The two elements firmly connect Superman Returns with the franchise’s big budget cinematic beginnings.

Those touches are nice, but Superman Returns ends up feeling like the recent X-Men: The Last Stand, which was technically a well-made film, but had the fatal flaw of being a film in which the characters and situations were two dark or in which the characters seemed… oddly out of character. Superman Returns is also from a technical stand point very well made, and from a narrative point pretty good. Still, Bryan Singer, who not only directs the film, but also wrote the story upon which the screenplay is based, has two flaws. It’s too long and it is too obviously trying to be something important – something more than just being a movie based upon a comic book.

Singer stuffs the film with chick flick sensibilities – lots of romance, romantic entanglements, yearnings for lost love, etc. Some of it good, but it gets old after awhile. Actually it gets in the way of Superman in action, which is a bad thing because Superman is a superhero and superheroes do cool things with their powers. The film is also rife and ripe with mythic aspirations and religious symbolism. There are a few powerful speeches about Superman being Christ-like – the savior or the only son sent by powerful being (his Kryptonian father Jor-El) to Earth to help the tragically flawed humans. That’s nice, but it’s also overkill, just fluff in the way of the cool scenes of Superman being Superman.

That’s one of the good things about Superman Returns – which is that it occasionally remembers how cool Superman is, so Singer treats us to lots of scenes of him soaring over the city, through the sky, and into space. When Superman is using his powers or even if he’s just flexing his muscles (there’s a nice flashback of a young Clark Kent learning that he can run fast, leap to dizzying heights, and also levitate), Superman Returns springs to glorious life. The film also looks good, although some of the visual effects and CGI are so obviously fake that it’s painful to spot them. The score by John Ottman (who also co-edited the film) is a worthy successor to John Williams’ music in the original film.

The cast ranges from adequate to good. Kevin Spacey is cool, vicious, and sinister as Lex Luthor (because Spacey is evil). Sam Huntington has a youthful snappiness and genuine friendliness as Clark’s cub reporter pal, Jimmy Olsen. Kate Bosworth makes a decent love interest in the film, but she is wrong as Lois Lane; she just doesn’t capture the spunkiness and boldness that defines Lois Lane as the kind of reporter who can tackle any story. On the other hand, James Marsden makes Richard White more than just an add-on to the Superman mythos. While Parker Posey seemed out of place in Blade: Trinity, she fits in here as Luthor’s “girlfriend, Kitty Kowalski.

How well did Brandon Routh fill the late Christopher Reeve’s shoes as Clark Kent/Superman. He does a damn good job. Routh makes his Clark Kent a humble and gentle soul, but he shows us the secret and barely hidden fire that burns in Clark’s eyes – that which is Superman ready to burst out. Routh’s Superman is both mythic and godlike. Routh creates an otherness about Superman – a stoic savior who takes on any task without blinking and likely not a doubt in his mind. Not only is Routh as good as other actors who’ve given the best performances playing superheroes (Christian Bale as Bruce Wayne/Batman and Tobey Maguire as Peter Parker/Spider-Man), but Routh’s performance rings with truth. It’s as if the fictional Superman of the comics has sprung to life from the pages of a comic book.

I’ll give Superman Returns the provisional six out of 10 that I gave X-Men: The Last Stand, but Routh makes this colorful and brightly lit fantasy worth seeing. He puts the super and the hero in Superman Returns.

Posted by Leroy Douresseaux at 7:10 AM