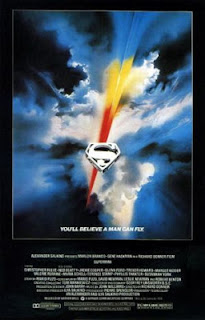 SUPERHERO/ACTION/DRAMA with elements of comedy and sci-fi

Superman: The Movie is the first of four films starring the late actor, Christopher Reeve, in the role of Superman and also his civilian identity, Clark Kent. Although he does not receive a screenwriting credit, Tom Mankiewicz wrote Superman: The Movie’s final draft script. The father-son team of Alexander and Ilya Salkind produced this movie along with Pierre Spengler. The movie depicts Superman’s origin, from his birth on a distant planet to his youth in a rural small town, Smallville. The movie also begins to chronicle his adult life as a big city newspaper reporter and as Superman.

Mild-mannered Clark Kent (Christopher Reeve) works as a reporter at The Daily Planet, one of the major newspapers in the city of Metropolis (a stand-in for New York City). He has a crush on fellow ace reporter, Lois Lane (Margot Kidder), but Lois has a crush on the flying, impossibly strong hero, Superman (Christopher Reeve). Superman, however, is the alter ego of Clark Kent, and Kent also has many other secrets. He’s from another world, the planet Krypton, and before Krypton exploded, his father, Jor-El (Marlon Brando) sent baby Clark, whose birth name is Kal-El, in a starship on a three-year journey to Earth. Shortly after the star ship carrying Kal-El crashes in a Kansas field, a middle-aged couple, Martha and Jonathan Kent (Phyllis Thaxter and Glenn Ford), takes Kal-El as their own and names him Clark Kent.

Not long after Superman reveals himself to the world, he runs up against the nefarious genius, Lex Luthor (Gene Hackman), who has launched a plan to destroy much of western California in a real estate scheme that will make him perhaps the richest man on earth, although it will kill millions of people. Superman has met his match. Not only must he save millions of lives, but he must also save his friends Lois and cub reporter, Jimmy Olsen (Marc McClure), and even Superman might not have enough time to do that.

Nearly 30 years after its first release, many critics and fans still consider director Richard Donner’s (The Omen) Oscar-nominated film, Superman: The Movie, to be the definitive big screen version of DC Comics’ venerable superhero. Christopher Reeve, a then unknown when cast to play Clark Kent/Superman, also remains for many the definitive screen Superman, be it TV or film (I personally prefer George Reeves of the 1950’s “Superman” TV series).

This version of Superman is an example of producer spending a large sums of money on a film and actually getting superior results. A talented director and crew of good writers took a cast that included a few great actors and movie stars, quality character actors, and some up and coming new talent and told an epic story that fills the viewer with the same kind of wonder of which the film itself is made. Everything works: Marlon Brando is a solemn, otherworldly, mystic-like figure that presides over the first half of the film like a grand marshal in an ambitious parade.

Gene Hackman is a smooth, scene-stealing, genius wise guy as Lex Luthor (and though I’m a big fan of Hackman, I’ve always had slight misgivings about Hackman as Luthor). Other cast members also resonate: Jackie Cooper is pitch-perfect tart as Planet boss, Perry White; Margot Kidder as Lois Lane is both tomboyish and girlish with a touch of feminism; and Marc McClure is spot-on as a Jimmy. Simply put, Reeve seems to embody both Clark and Superman. It’s as if he stepped out of a classic Superman comic book, and that’s enough to make it all work.

Superman’s technical aspects were also high quality. The visual effects are actually still good; they stand up to much of the high-priced, over-the-top computer effects done today. Using a harness and cranes to lift Christopher Reeve and give him the illusion of flying was and still is great stuff. As the film’s tagline says, “You’ll Believe a Man Can Fly.”