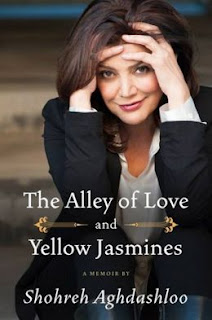 THE ALLEY OF LOVE AND YELLOW JASMINES
HARPERCOLLINS – @HarperCollins

Shohreh Aghdashloo is an Iranian-American actress. She is probably best known for the Oscar nomination she earned as “Best Actress in a Supporting Role” for portraying Nadereh “Nadi” Behrani, the wife of Ben Kingsley’s Colonel Behrani in the 2003 film, House of Sand and Fog (76th Academy Awards). In 2009, Aghdashloo won the Primetime Emmy Award for “Outstanding Supporting Actress in a Miniseries or a Movie” for portraying Sajida Khairallah Talfah in the BBC/HBO miniseries, House of Saddam (2008).

Superhero fans may remember Aghdashloo for portraying Dr. Kavita Rao in X-Men: The Last Stand (2006). In the film, Dr. Rao is a scientist working at Worthington Labs on the “mutant cure,” an inoculation (or shot) that will suppress the X-gene that gives mutants their abilities and makes them different from other humans.

Now, Shohreh Aghdashloo is sharing her journey from a childhood in Iran to the red carpets of Hollywood in her new memoir, The Alley of Love and Yellow Jasmines. The actress tells stories of family, faith, revolution, and hope.

She was born Shohreh Vaziri-Tabar on May 11, 1952 and grew up in affluent Tehran in the 1950s and 60s. However, Shohreh begins her story on Sunday, February 29, 2004 – the day of the 76th Academy Award ceremony. That day and the beginning of the night take up the first chapter, in which Shohreh even tells us about the two big Hollywood stars that snubbed her.

Afterwards, Shohreh, the author and storyteller, returns to her youth. Shohreh dreamed of becoming an actress, despite her parents’ more practical plans that she study to become a doctor. Shohreh was enchanted by the movies she watched while growing up in affluent Tehran in the 1950s and 60s. She fell in love and married her husband, Aydin Aghdashloo, a painter twelve years her senior and from whom she got her professional name. Shohreh made him promise he’d allow her to follow her passion.

The first years of their marriage were magical, as Shohreh began to build a promising acting career on screen and stage. Meanwhile, Aydin worked at the royal offices as an art director, exhibited his paintings in Tehran, and collected calligraphy. However, in 1979, revolution swept Iran, toppling the Shah Mohammed Reza Pahlavi’s regime and installing an Islamic republic ruled by the former exiled cleric, Ayatollah Khomeini. Shohreh, alarmed by the stifling new restrictions on women and art, decided to escape the new regime and her home country. She began a journey that would eventually lead her to Los Angeles, to a new home, to a new family, and finally to the Hollywood career of which she’d always dreamed.

The most surprising thing about The Alley of Love and Yellow Jasmines is how well-written it is, and I say that because the tale Shohreh Aghdashloo tells is occasionally mesmerizing. Shohreh the acclaimed actress becomes Shohreh the acclaimed author with this dazzling effort. Not every celebrity can pull off a well-written opinion piece, let alone an entire book. Is there anything that has come out of Charles Barkley and Bill O’Reilly’s mouths that makes you think they are actually articulate and literate enough to have written the books credited to them?

Shohreh’s prose is impressive and especially vivid. Readers will imagine that they are experiencing the sights, sounds, and sensations Shohreh describes, as if her memories are also their memories. Speaking personally, when Shohreh wrote of her time as a young fashion model, her words made my imagination work to envision the clothes and fashions she wore so many decades ago.

Iran comes to life for me as it never has before, because I was seeing a place where people lived and not as an enemy state, which is how Iran is so often portrayed in Western media. I think the most important thing, however, is that the reader comes to feel and to understand Shohreh Aghdashloo’s desire to be an artist and an actor.

I do think that Shohreh is vague in some spots. She really only scratches at the surface of her political and social activism. It is almost as if it is something she does not want to hide, yet is forced to leave out details in some instances.

Shohreh is relatively unknown to American audience, even with her success. The Alley of Love and Yellow Jasmines, this book written in such a dazzling and colorful manner, will make you want to know her. This is one book written by an actor about her life that is certainly worth reading.

Readers of actors’ memoirs must have The Alley of Love and Yellow Jasmines.

Posted by Leroy Douresseaux at 7:07 AM