Review: Tom and Jerry: Back to Oz 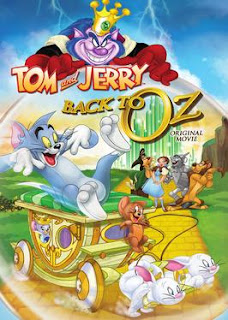 Both these films take inspiration and source material from the 1939 MGM film, The Wizard of Oz, and places Tom and Jerry (who began as MGM cartoon characters) alongside Dorothy, Toto, the Wicked Witch of the West, and the rest of the characters from that beloved classic film.  Tom and Jerry: Back to Oz is also the first sequel in the Tom and Jerry direct-to-video film series.  [Back to Oz is also the final work of noted animation voice actor Joe Alaskey who died of cancer on February 3, 2016, and this film is dedicated to his memory.]

Back to Oz opens on the Gale farm.  Dorothy Gale (Grey Griffin), Auntie Em (Frances Conroy), Uncle Henry (Stephen Root), Toto, the three farm hands, and Tom and Jerry are still cleaning up the damage caused by the twister that wrecked the farm in the first film.  The Gales are on the verge of losing the farm because of a lawsuit brought by neighbor, Lucius Bibb (Jason Alexander).  Auntie Em, Uncle Henry, and the three farmhands immediately set out to find jobs that can help them get money to pay off the damages Bibb is claiming they brought on his property (a prized watermelon patch).

Dorothy is left behind because the adults consider her too young to work.  While cleaning up, Dorothy, Toto, and Tom and Jerry are attacked by flying monkeys, which had once served the Wicked Witch of West.  During the attack, Dorothy's companions from the Land of Oz:  Scarecrow (Michael J. Gough), Tin Man (Rob Paulsen), and the no-longer-cowardly Lion (Todd Stashwick) arrive to inform her that Oz is under attack again.  This time, Ruggedo the Nome King (Jason Alexander) is taking over the Emerald City, so Dorothy is once again off to see the Wonderful Wizard of Oz (Joe Alaskey) in a bid to save Oz.

Tom and Jerry: Back to Oz is not as good as its predecessor, Tom and Jerry & the Wizard of Oz.  However, a return to the Oz that was created by filmmakers, cast, and crew of MGM's 1939 The Wizard of Oz, even a cartoon version of it, is welcomed – at least by me and some others.  There are apparently a lot of us, or at least enough to create a sequel to the first Tom and Jerry Oz.

Honestly, that is the explanation for whatever success this film, Tom and Jerry: Back to Oz, has – its connection to a truly classic American film, one of the best movies of all time.  I won't be fake and deny it.  I hope Tom and Jerry go back to that Oz, again.

Posted by Leroy Douresseaux at 1:06 PM