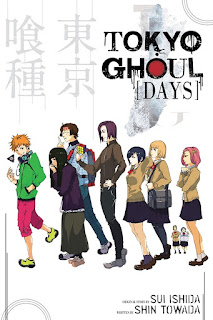 VIZ MEDIA EXPANDS TOKYO GHOUL CATALOG OF ORIGINAL NOVELS WITH THE RELEASE OF TOKYO GHOUL: PAST

San Francisco, CA – VIZ Media, LLC (VIZ Media), a premier company in the fields of publishing, animation distribution, and global entertainment licensing, notably expands its catalog of original novels inspired by the smash hit TOKYO GHOUL with the print and digital release of TOKYO GHOUL: PAST on April 18th, 2017.

The latest novel is the third release in an ongoing series of original stories, each focusing on a lead character from the bestselling manga series created by Sui Ishida. TOKYO GHOUL: PAST was written by Shin Towada and debuts under the VIZ Signature imprint. The novel will be released in print with an MSRP of $12.99 U.S. / $17.99 CAN. It also be will available digitally for $8.99 from VIZ.com/read, the VIZ Manga App, and worldwide through Nook, Kobo, Kindle, iBooks, comiXology, and Google Play.

Before the steel frame incident in the 20th Ward, there were reports of Ghouls lurking among the masses in Tokyo, carefully stalking their prey. TOKYO GHOUL: PAST covers the events that occurred before the opening act of TOKYO GHOUL – a time when Kaneki was still human, the Kirishimas still lived together, and Rize enjoyed her feasts.

“TOKYO GHOUL has become an international bestseller with its mysterious flesh eating Ghouls that live in the shadows of the everyday hustle and bustle of Tokyo,” says Nick Mamatas, Editor. “The latest novel serves as the perfect complement to the ongoing manga series and continues to explore the lives, backgrounds and dramas of the series’ key characters. We look forward to ardent fans discovering this new release!”

For additional information on TOKYO GHOUL and other manga and anime titles from by VIZ Media, please visit VIZ.com.