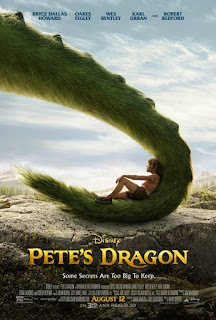 Pete's Dragon is a 2016 fantasy drama and family movie from director David Lowery.  It is a remake of Walt Disney's 1977 live-action/animated musical film, Pete's Dragon.  The new Pete's Dragon tells the story of an orphaned boy and his best friend, a dragon, and what happens when the outside world discovers their existence.

When he was five, Pete experienced a tragedy that left him an orphan.  Lost in the forest, Pete meets a large dragon with green fur, yellow eyes, and wings on its back.  Pete names the dragon “Elliot” after a character in his favorite storybook, “Elliot Gets Lost,” and the boy and his dragon become a family.

Six years later, Pete (Oakes Fegley) spies forest ranger Grace Meachum (Bryce Dallas Howard) and is curious about her.  However, it is his encounter with a girl his age, Natalie (Oona Laurence), that brings Pete into contact with the world outside the forest where he lives with Elliot.  Soon, Pete is living among people again, and humans are hunting for Elliot, whom they know as the local legend, “the Millhaven dragon.”

I have only seen bits and pieces of the original 1977 Pete's Dragon, and I was not interested in this new film.  I even wondered why Disney needed to remake it.  Were there people really clamoring for a fresh take on a film that had probably seen its day come and gone?  I received a copy-for-review of the recent Blu-ray/DVD release of the new Pete's Dragon, obligating me to watch it.

I was surprised to find that I enjoyed it, although I think that this movie is truly a children's film.  In the last few decades, movie studios often believe that they have to make kids' movies have elements that appeal to the parents and adults that bring children to see movies aimed at the little ones.  I don't think that Pete's Dragon does that.

Pete's Dragon is a tale of child who lives in the world in his own terms.  As usual, adults cannot or will not see the magic he (Pete) lives with everyday.  It takes another child (Natalie) to truly understand the child hero's point of view.  In fact, the adult that is most successful in helping Pete, Grace, turns out to be the one most open to trying to see what the child does by listening and learning from the child.

This is one of those so-called “little movies,” cinematic gems that bide their time, gradually attracting new audiences one viewing at a time.  Pete's Dragon isn't perfect, but it is perfect for children and the child in adult viewers.