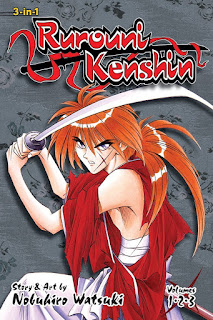 Creator Nobuhiro Watsuki’s acclaimed saga of a drifting swordsman in Meiji Era Japan is rated ‘T+’ for Older Teen and the new 3-in-1 editions will carry a print MSRP of $14.99 U.S. / $19.99 CAN each. New omnibus volumes will be published on a quarterly basis.

In RUROUNI KENSHIN, Himura Battosai was once an assassin of ferocious power during the violent upheaval of the Bakumatsu era. But as the Meiji Restoration heals the wounds of civil war, Battosai takes up a new name and a new calling. As Himura Kenshin, he now fights only to protect the honor of those in need.

RUROUNI KENSHIN made its first appearance in Japan in 1992 as an original short story in Weekly Shonen Jump Special and went on to garner fans around the world. Later rewritten and published as a regular, continuing manga series in 1994, RUROUNI KENSHIN ended serialization in 1999 but it continued in popularity, as evidenced by the 2000 publication of Yahiko no Sakabato (Yahiko’s Reversed-Edge Sword) and the 2015 publication of RUROUNI KENSHIN: RESTORATION in WEEKLY SHONEN JUMP. The series also has inspired novels, anime and feature films. Creator Watsuki is also the author of the popular series, BUSO RENKIN, which is published by VIZ Media.