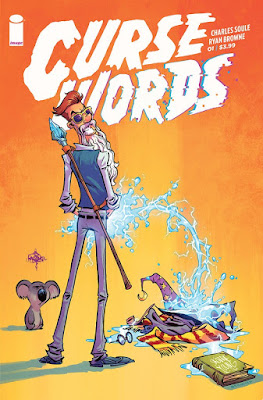 Fans of I HATE FAIRYLAND will love this cover artwork

Young’s characteristic wit is on display in this cover featuring CURSE WORDS’ main character, Wizord… Erm, expressing his contempt for the stereotypical “wizard” people are familiar with... as Margaret watches on disapprovingly.

In CURSE WORDS #1, a wizard has appeared in New York City, and he's casting wonderful spells, getting famous, getting rich—it's great! But it's not. This wizard has everyone fooled. He is actually an evil wizard, and evil things are on the way. CURSE WORDS is a gonzo modern fantasy, full of darkness, light… and magic.