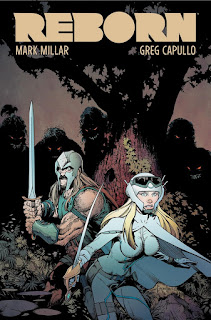 SLEW OF REBORN ISSUES SENT BACK TO PRESS

Image Comics is pleased to announce that multiple issues of the hot new series REBORN by Mark Millar (Kingsman: The Secret Service) and Greg Capullo (Batman) have been fast-tracked for subsequent printings in order to keep up with rapid growth in customer demand.

REBORN asks: Where do you go when you die? Not heaven or hell; somewhere else. Somewhere you have to fight to survive. Somewhere the people from the past are waiting for you—the good and the bad.

The series takes readers on an afterlife journey through Adystria where newly reborn Bonnie Black is the savior everyone’s been waiting for, but evil lurks within the Dark Lands... and it’s getting stronger...

The following will be available on Wednesday, January 25th, 2017. The final order cutoff deadline for retailers is Monday, January 2nd, 2017:

Posted by Leroy Douresseaux at 10:35 AM