Review: THE PRINCESS BRIDE: A Storybook to Color 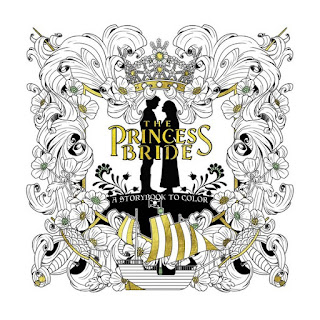 THE PRINCESS BRIDE: A STORYBOOK TO COLOR
IDW PUBLISHING – @IDWPublishing

The Princess Bride is a 1987 fantasy and romantic film from director Rob Reiner.  William Goldman wrote the film's screenplay, basing it upon his 1973 fantasy novel, also entitled The Princess Bride.

The film uses as its framing sequence a grandfather reading a book, entitled “The Princess Bride,” to his ailing grandson.  The book's story concerns a beautiful farmgirl, Buttercup, and the love of her life, the farmhand-turned-pirate, Wesley, and their struggle against the arrogant Prince Humperdinck of Florin who is determined that Buttercup marry him.

The film will celebrate its 30th anniversary in 2017; it was originally released to U.S. theaters in October 1987.  Oscar-nominated, The Princess Bride has a loyal following that seems to continue to grow, and among movie fans, it is one of the most beloved American films of all time.

Adult coloring books have been all the rage the last few years.  Of course, it is conceivable that The Princess Bride would be perfect for adaptation into a coloring book, adult or otherwise.  It should only be done, however, if it can be done right.  An artist and her publisher, in fact, did it right.

I love The Princess Bride, and so does Rachel Curtis.  She turns practically every key moment in the film into double-page illustrated spreads for readers to color.  There are even pages that take as a theme objects that are key to the film, including swords, ropes, items of clothing, eyeglasses, implements, and crowns, to name a few.

The spreads that I like the most include recreations of some of my favorite scenes in The Princess Bride.  Curtis offers a stylish take on the scene in which Buttercup faces giant eels that menace her as she tries to swim to safety; it looks like a stain glass illustration.  Curtis perfectly captures the poison-wine duel sequence between Wesley and Vizzini, the Sicilian crime boss who holds a knife on Buttercup.  I can't resist the two-page spread of decorative R.O.U.S. (rats of unusual size), and her wide screen interpretation of Count Rugen's torture experimentation chamber is impressive.

I love Curtis' take on the sequence of the heroes riding off into forever after their victory at Humperdinck's castle.  If you want to draw your own version of that scene or any other, Curtis crafted a few pages with decorative borders and space for you to illustrate.  Rachel Curtis' detailed, decorative, and emotive illustrations are a love letter to both The Princess Bride and to its fans.  That makes The Princess Bride: A Storybook to Color a superb gift for The Princess Bride fan.

Posted by Leroy Douresseaux at 5:24 PM