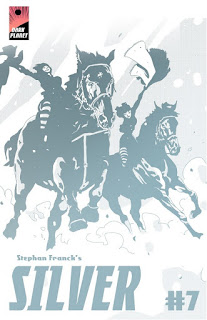 Los Angeles, CA – Dark Planet announced today that its award-nominated graphic novel series SILVER returns with the digital release of SILVER #7 “Of Hunters And Prey”, an explosive 53-page new extended-issue full of action, drama, and character secrets. SILVER #7 will be available on ComiXology on December 14th, 2016 and from the Dark Planet Webstore. ComiXology has previously included SILVER in its “ESSENTIAL READS” list.

An extension of Bram Stoker’s Dracula set 40 years after the seminal novel’s events, SILVER is told as a classic heist story. It features James Finnigan, a morally ambiguous, pulp-era conman, Rosalynd “Sledge” Van Helsing, who carries on her famous grandfather’s handywork, Tao Leu, a 10 year-old boy with the gift of second sight, and their team of grifters, as they attempt to steal The Silver Dragon--a massive treasure hidden in a castle full of vampires. Staying true to its literary origins while creating its own expansive and wildly original mythology, SILVER is both faithful homage and exciting reinvention.

SILVER #7 “Of Hunters And Prey” picks up where SILVER #6/ Vol. 2 left off. It focuses first on Finn and Tao’s relationship, as the kid was shaken by a recent brush with death. The issue then turns its attention to Sledge, with a 40+ page uninterrupted action sequence tour-de-force which sees her go rogue, puts her through the wringer, and ultimately culminates with the reveal of a deep, dark secret 6 issues in the making.

Since the series’ inception, SILVER has counted some of the most original and contemporary voices from the comics world among its fans:

"What impresses me about SILVER isn't just its Mignola-esque reshuffling of history, or the fanciful legerdemain that keeps the story light on its toes. It's author Stephan Franck's ability to splice genres together like a narrative geneticist. Part Ocean’s Eleven, part From Dusk Till Dawn, with an added dash of American Vampire-cum-noir, SILVER will take you deeper and deeper under its spell until you can't help but beg for more."
--Samuel Sattin, author of  Legend and The Silent End:

“A Hitchcock thriller. Vintage pulp. Grindhouse cinema. SILVER has all of the elements you crave and a story that you’ll simply devour.”
--David Gallaher, author of High Moon  and  The Only Living Boy

An indy grassroots sensation that came up through the convention scene, SILVER has connected with a passionate and diverse audience, including readers new to the comic book medium. “Coming from a movie background, I try to apply my film-language instincts to the comic book page, which means highlight a dramatic sense of point of view while keeping the audience oriented at all times,” says Franck. “I think that type of formalism has had a lot to do with making Silver’s storytelling accessible to people who had never picked up a comic book before. I am super proud of that.”

While Dark Planet releases SILVER’s single issues directly to digital, the series’ collected editions--SILVER Volume 1 and 2--are also distributed in print to comic shops everywhere, on Amazon, from the Dark Planet Webstore and from the Dark Planet booth at comic book conventions across the US, where the company maintains a dynamic presence. SILVER is also licensed internationally to foreign publishers around the world.


MORE ABOUT THE AUTHOR:
Stephan Franck is an award-nominated animator/writer/director/comic book creator. He was a supervising animator on the cult classic THE IRON GIANT, and contributed story to DESPICABLE ME. He co-created the animated TV series CORNEIL & BERNIE (Nicktoons - Hub Network), and received an Annie Award nomination for Best Director In a TV Program for the featurette SMURFS: THE LEGEND OF SMURFY HOLLOW. Stephan has closely collaborated with talent as diverse as George Lucas and Adam Sandler, and in 2013, founded comic-book publishing and production company DARK PLANET. SILVER, his graphic novel debut under the Dark Planet Imprint, earned a nomination for the prestigious Russ Manning Award at San Diego Comic Con 2014, and a 2015 Geekie Award nomination for Best Comic/Graphic Novel. SILVER also landed on ComiXology Submit’s ESSENTIAL READS list and is now distributed around the world.