Review: "The Hunt for Red October" Still a Goodie 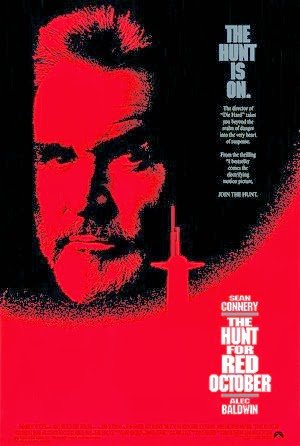 The Hunt for Red October opens in 1984 in the USSR and introduces Captain Marko Ramius (Sean Connery).  He commands the Red October, a ballistic missile submarine that is virtually undetectable.  The ship’s first mission is to be part of USSR war game exercises, but early in the mission, the Red October disappears.

In the United States, a young CIA analyst, Jack Ryan (Alec Baldwin), gets an assignment from Vice Admiral James Greer (James Earl Jones), CIA Deputy Director of Intelligence.  Ryan must discover Ramius’ intentions before a war breaks out between the Americans and the Russians over the missing Red October.  Is Ramius trying to defect, or to start a war?

Tom Clancy’s intrepid CIA agent, Jack Ryan, makes his first big screen appearance in The Hunt for Red October.  Actor Harrison Ford would play the character in 1992’s Patriot Games and 2004’s Clear and Present Danger.  Ben Affleck would play Ryan in The Sum of All Fears (2002), which I have not seen as of this writing.  Clear and Present Danger is one of my all-time favorite movies, and honestly, I can’t say if I like Baldwin or Ford more as Ryan, because both are among my favorite actors.

The Hunt for Red October is not a great movie, but it is greatly entertaining.  It is skillfully directed by John McTiernan, who, for a time from the late 1980s to the mid-1990s, was one of the supreme directors of big, masculine, and loud action movies.  The expert film editing in this movie reveals McTiernan’s efficiency at creating a story that is part clever and deceptive game and part espionage thriller – all wrapped inside the mechanics of a military film.

Sean Connery as Ramius and Alec Baldwin as Ryan are convincing and proficient, and while this is not their best work, they create characters we want to be next to and follow into adventure.  I had not seen this movie in years, but it is as good as or maybe even better than I remember.  The Hunt for Red October is the techno-thriller that does not require the viewer to be smart to watch it.  That is not a slap at the audience; that’s a compliment to say that The Hunt for Red October is a smart movie that is also successful at entertaining.


Posted by Leroy Douresseaux at 6:51 AM