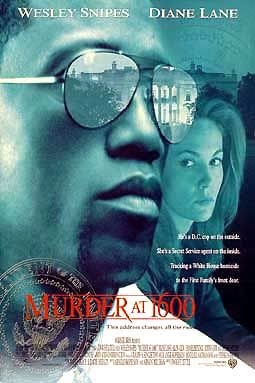 DRAMA/CRIME/THRILLER with elements of action

The subject of this movie review is Murder at 1600, a 1997 crime and detective thriller from director Dwight H. Little and starring Wesley Snipes and Diane Lane.  The film follows a homicide detective and a secret service agent as they try to unravel the conspiracy surrounding a young female staffer found dead in a White House wash room.

Washington D. C. Police Homicide Detective Harlan Regis (Wesley Snipes) gets a call that there has been a murder at 1600 Pennsylvania Avenue, the address of the White House.  When he arrives, he discovers the body of a slain young woman, and it is obvious that the Secret Service has already tampered with and removed evidence from the crime scene.  He immediately suspects a cover up.

Through a lot of effort, he eventually convinces Secret Service Agent Nina Chance (Diane Lane) to join him in the murder investigation.  From that point, they operate through a myriad of roadblocks and obstacles.  They are constantly on the run from murderous pursuers and others intent on stopping the investigation.  Raising the intensity level, the murder occurs during a touchy international incident between the United States and North Korea.

Directed by veteran helmsman Dwight H. Little (episodes of “The Practice” and Free Willy 2: The Adventure Home), Murder at 1600 is a surprisingly intriguing and exciting movie.  With elements of suspense, mystery, and drama, it is something of a thriller and an action movie.  Little expertly paces them film so that there is never a dull moment.  Something’s always just around the corner, and some seemingly nefarious person is always in the next room.  Add the element of government paid snipers and assassins, and the result is a nice edge of your seat picture - a chase movie for grown ups.

The writers Wayne Beach and the late David Hodgin do a wonderful job creating a single plot line that neatly divides into other interesting plot lines.  Very little is thrown away in this movie.  Like a classic whodunit, the suspects and motives pile on, but not like crap on the wall.  Rather, it’s like a complex puzzle, with not too many pieces, for the viewer it’s an engaging challenge to put together.

Wesley Snipes has always wanted to be an action movie badass, but his gift is in his untapped acting talent.  His rock solid good looks and thespian skills make him a natural leading man in the old Hollywood tradition (Kirk Douglas or Humphrey Bogart).  Like them, he is best in dramas that are suspenseful and intriguing.  He carries this movie on his strong shoulders even when the movie action becomes implausible.

Diane Lane (“Lonesome Dove”) is also another surprise.  She is a natural beauty, more earthy than doll-like without a model’s overdone and artificial looks.  She’s a woman’s woman – gritty and determined to do her job.  Her Nina Chance is the ideal partner to Snipes' Regis.  She isn’t the typical action movie female baggage; she holds her own, and she gets to pull Regis out of the fire a few times.

Ronny Cox as President Jack Neil and Alan Alda as Alvin Jordan, National Security Advisor are very good and quite intense in their parts.  Both are seemingly determined and over anxious to “be real” in their parts.  Dennis Miller makes a light add-on to the story and manages to serve a function, but nothing, not even his light part, hurts this movie.

Murder at 1600 isn’t by any means great, but it is very good and somewhat smart entertainment.  The last fifteen minutes or so is an exercise in the implausible, and is often inadvertently funny.  However, there is something to be said for making a movie that could have been bad quite enjoyable.