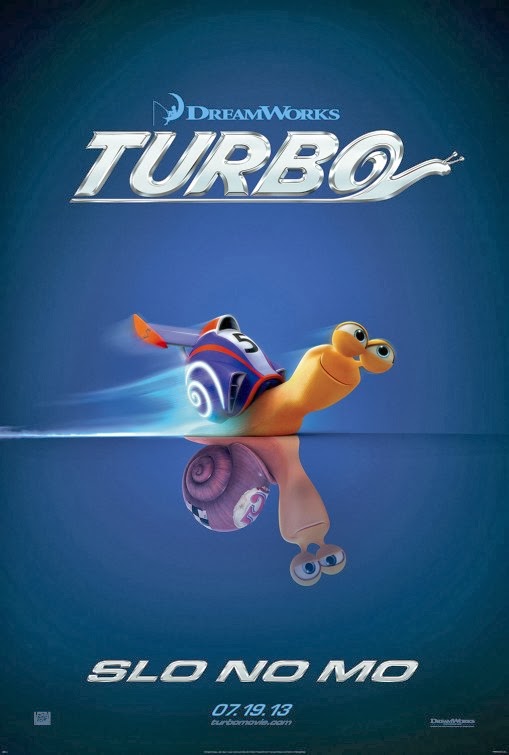 Turbo is a 2013 computer-animated family comedy and racing film from DreamWorks Animation.  Theatrically presented in 3D, the film is directed by David Soren, who first conceived the idea for the film several years prior to its eventual production and release.  Turbo follows an ordinary garden snail that wants to win the Indy 500 and may be able to do so because of a freak accident.

Turbo introduces Theo (Ryan Reynolds), a snail who lives in a suburban San Fernando Valley garden in a snail community that is wary of change.  Theo dreams of becoming the greatest race car driver in the world, just like his human hero, Guy Gagné (Bill Hader), five-time Indianapolis 500 champion.  Theo even gives himself the nickname, “Turbo.”  His obsession with speed and car racing makes Theo an oddity and embarrasses his cautious older brother, Chet (Paul Giamatti).

After causing a near-disaster in the garden, Theo wanders from the village, his mind focused on his wish of becoming fast.  By chance, an accident involving drag racing and nitrous oxide imbues Theo with high-octane speed.  Suddenly, his dreams of racing in the Indianapolis 500 might come true, but Theo/Turbo will learn that his dreams cannot come true without help from friends and family.

I like Turbo.  I thought that I would like it when I first staring seeing commercials for the film on television, although I must admit that I found its concept a little silly, if not ridiculous.  However, there is something likeable about this little can-do snail who goes by the moniker, Turbo.  It is like the little engine that could, except this little engine is blazing fast and fun to watch.

Surprisingly, Turbo is not as inventive as its concept might suggest.  The characters are pedestrian, especially the humans, upon which this film spends entirely too much time.  The humans have very little character, actually, and are little more than the kind of stereotypes that run of the mill TV sitcoms offer.

The other snail characters are interesting and fun, but are wasted because human characters get more screen time than them.  As Turbo’s brother, Chet, actor Paul Giamatti does his best to bring color and range to a character that is simply a variation on the older brother-type who doubts his younger brother.  Samuel L. Jackson makes the most of his scenes as the voice of Whiplash, the leader of the Starlight Plaza Snail crew.  The presence and fury that Jackson has as a live-action actor, he brings to his voice acting performance.  Jackson’s performance made me wish that Whiplash had a much bigger role in this movie.

I don’t know if Turbo could have been a great animated film, the kind that becomes a classic.  I think that Turbo certainly needed some rewriting and re-conceptualizing, but the film is good and has an endearing quality.  Turbo is one of the few animated films that I do not consider exceptional, but of which I would still like to see a sequel.


Posted by Leroy Douresseaux at 9:15 AM