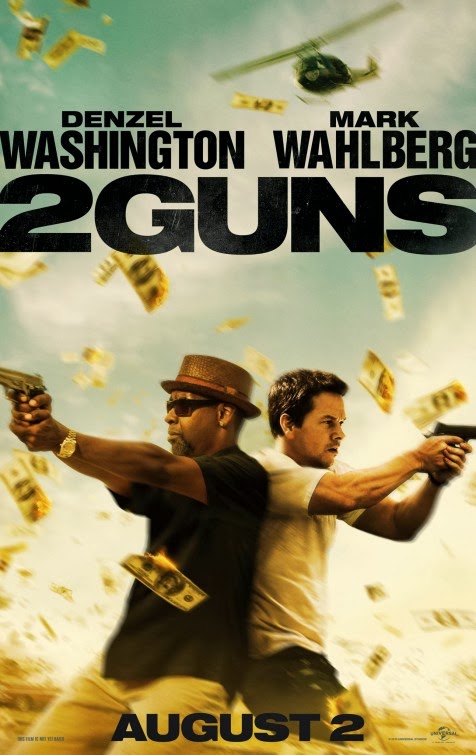 ACTION/CRIME with elements of a comedy

2 Guns is a 2013 action and crime film from director Baltasar Kormákur.  The film is based on Two Guns, a 2007 comic book by writer-creator Steven Grant and artist Mateus Santolouco.  2 Guns the movie stars Denzel Washington and Mark Wahlberg as a DEA agent and a naval intelligence officer, respectively, on the run and double-crossed after a botched attempt to infiltrate a drug cartel.

2 Guns introduces Robert Lynn Trench (Denzel Washington), who is an agent with the DEA (Drug Enforcement Agency), and Petty Officer Michael Stigman (Mark Wahlberg), who is with United States Naval Intelligence.  They only know each other, however, as Bobby Beans and Stig, two dudes trying to make it big in the world of narcotics dealing.

The duo robs a bank in Tres Cruces, New Mexico, in an attempt to infiltrate the drug cartel controlled by Papi Greco (Edward James Olmos).  They find more than they expect:  about themselves, about their respective superiors in the worlds of law enforcement and the U.S. Navy, and about the money – the really large of sum of money.  Now, Bobby and Stigman’s shaky alliance has to stay strong if they want to stay alive.

I have described some movies as basically being “not great, but entertaining.”  That is 2 Guns.  This is not filet mignon; this is like a Big Mac®, which delivers the tastiness you expect when you buy a Big Mac.  2 Guns delivers the fun you would expect from a movie about a lone gun who is betrayed and on the run – times two lone guns.  The viewer will have to wade through about an hour of set-up and build-up before the buddy-movie action explodes in a hail of bullets and a pile of bodies.

In this film, Denzel Washington and Mark Wahlberg are pretty much doing the kinds of characters they have done before in one form or another, except this time, there is plenty of winking and nudging.  2 Guns is an action movie with a comic edge.  It is light and fizzy, and by the end of the movie, I was hoping for a sequel.

2 Guns was something of a box office disappointment, but fans of Washington and Wahlberg will be delightfully surprised when they find this movie on DVD or on television – for years to come.


Posted by Leroy Douresseaux at 8:47 AM