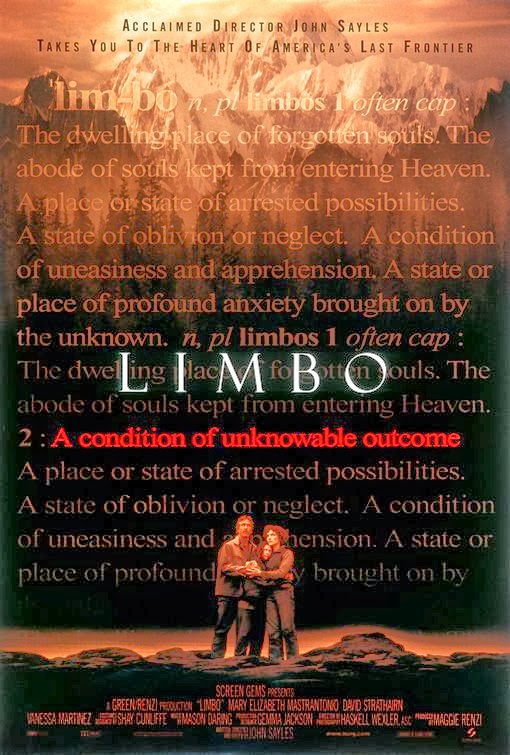 The subject of this movie review is Limbo, a 1999 drama and crime-thriller from writer-director John Sayles.  The film focuses on a fisherman who tries to protect his new girlfriend and her daughter from his past and his brother’s present.  The film was nominated for the Palme d'Or at the 1999 Cannes Film Festival, and at the 1999 Seattle International Film Festival, Sayles received the “Golden Space Needle Award” for “Best Director.”  The National Board of Review, USA also gave Limbo a “Special Recognition” award “For excellent in filmmaking.”

John Sayles is a true independent filmmaker, rarely dealing with the major studios to produce his pictures, although they have distributed them, as is the case with Limbo.  Upon seeing this film, one can understand why he remains an independent.  Most directors can do this kind of film once or twice, but to make a career out of films like this, a director has to have an iron will.

Joe Gastineau (David Strathairn, a veteran of several Sayles films) lives, but that’s all he does.  He merely lives, working a few odd jobs in a small Alaska town.  He meets and helps out Donna De Angelo (Mary Elizabeth Mastrantonio, Robin Hood: Prince of Thieves) a lovelorn lounge singer and the mother of one of Joe’s coworkers Noelle (Vanessa Martinez), and Joe gently falls for Donna.  When Joe’s self-inflated half-brother Bobby (Casey Siemaszko, Young Guns) blows into town, the four take a journey to up-country Alaska that changes and endangers their lives.

The acting is good, especially from the trio of Strathairn, Ms. Mastrantonio, and Ms. Martinez.  Strathairn is a vulnerable and moody character, but a quite approachable guy, a strong and supportive man when he has to be.  Ms. Mastrantonio is punch drunk from the love of broken relationships, but she never gives up on the positive, even when things keep falling apart.  Ms. Martinez is the sullen, self-pitying teen; quiet and withdrawn, she is an imaginative storyteller who can take elements of her life and create metaphorical delights.  Sayles has affection for these characters, and, because he takes time to give them depth, we care about them.

Sayles, a novelist and short story writer, creates films with characters that are very much like real people.  Each and every character has their own story, and a Sayles movie is actually of composition containing all these characters’ stories.  His gift is to show the viewers enough of each story so that they can get a feel for the film.  We see more of the lead characters’ stories, but we get a taste of every person’s story.  He is a visionary, able to weave stories with the same complexities and depth of a novel into the visual shorthand of a film.

Critics have accused his films of not having passion, but they have sold their souls for the press junkets and star interviews of the major studios and their product.  A Sayles film is vibrant and engaging.  He makes you think, and he lets you be part of the film, to put yourself inside the story.  This is as vicarious a thrill as any adrenalin-monkey action movie.