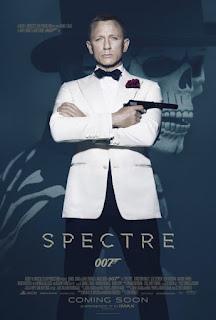 Spectre is a 2015 spy and adventure film from director Sam Mendes.  It is the 24th entry in EON Productions' James Bond film franchise, and it is also the fourth film in which actor Daniel Craig portrays Bond.  Spectre reintroduces the global criminal syndicate and terrorist organization, Spectre (formerly SPECTRE), which first appeared in the 1961 Bond novel, Thunderball, written by Bond's creator, Sir Ian Fleming.

Spectre opens with M16 agent James Bond-007 (Daniel Craig) on a mission in Mexico City where he confronts and kills terrorist leader, Marco Sciarra (Alessandro Cremona).  It turns out that Bond's mission was unauthorized.  That puts Gareth Mallory (Ralph Fiennes), the new “M” and the head of MI6, in a difficult position with one of his own superiors, Max Denbigh (Andrew Scott).  Denbigh wants to combine MI6 with MI5 and also to shutdown the “00” (or “Double-0”) program, and he sees Bond's activities in Mexico City as proof that the Double-0 program is outdated.

Bond disobeys an order that he not leave the U.K. and flies to Rome where he attends Sciarra's funeral.  He meets Sciarra's widow, Lucia (Monica Bellucci), who tells him that her late husband was part of a mysterious criminal organization known as “Spectre.”  Bond learns the location of a secret Spectre meeting and infiltrates it, where he identifies the leader, Franz Oberhauser (Christoph Waltz).  However, Oberhauser has been expecting Bond, and much to Bond's surprise, this shadowy leader is apparently and shockingly connected to Bond himself.

This is sort of spoiler warning:  Spectre is intimately connected to the previous Daniel Craig Bond films, Casino Royale (2006), Quantum of Solace (2008), and Skyfall (2012).  It completes the origin story of James Bond (at least the Craig iteration) and, at the end of the film, seems to send Bond off into retirement with a new love interest, Dr. Madeleine Swann (Léa Seydoux), who may finally be the real and true love interest for Bond.

Spectre received mixed reviews, but I have to say that I like it a lot and have few complaints.  It is reportedly the most expensive James Bond film ever made, with a production budget of about $245 million.  The Mexico City set piece alone must have cost millions of dollars to produce.  Still, Spectre does not come across as a giant, CGI-laden, blockbuster, event movie.

In different ways and at different moments, Spectre recalls the James Bond movies starring Sean Connery and Roger Moore.  When he needs to be, Craig is like Connery's masculine, gentlemanly killer, who was a chauvinist.  At other times, Craig is Moore's Bond, a suave secret agent who can cross multiple lines of social class in a single day and who always seems to be thinking at least a few steps ahead of his adversaries.  I think that I have always considered Connery and Moore to be the real movie James Bonds, with Moore being my favorite.  For me, Spectre solidified Daniel Craig as a real Bond.

Beside Craig, I cannot think of another performance that really captures my attention, maybe Dave Bautista as Mr. Hinx.  I found the two-time Academy Award winner, Christoph Waltz, somewhat unimpressive as the villain.  I do think that the Bond film series is onto something in giving Fiennes' M, Naomie Harris' Eve Moneypenny, Ben Whishaw's Q, and Rory Kinnear's Bill Tanner something to do other than simply to be at Bond's beck-and-call.

So... being honest with you, dear reader, I have to admit that Spectre hit something primal in me as a fan of James Bond films.  My enjoyment of it is so personal that perhaps you should take my rating of Spectre with a grain of salt – in a glass, shaken, not stirred.

Posted by Leroy Douresseaux at 4:04 PM