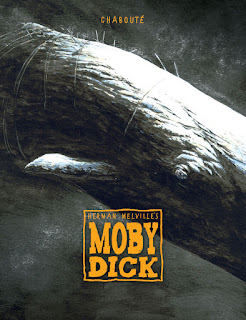 The graphic adaptation is perfect for literature lovers looking for a unique spin on the tale of the great white whale. The English edition includes a foreword by John Arcudi (Dead Inside, Rumble).

“No comics adaptation I’ve seen has come close to doing what Christophe Chabouté does right here in this graphic novel…His storytelling, his pacing, matches Melville’s perfectly,” said Arcudi. “He does it with obvious love for Melville’s poetic writing, and he has the advantage of a great gift for drawing that allows him to give light to those potent words. He can almost hypnotize us with his gorgeous, grand, rhythmic art.”

Moby Dick is available for preorder at Amazon, Barnes and Noble, IndieBound, Things From Another World, DarkHorse.com, and more!

Posted by Leroy Douresseaux at 10:15 AM