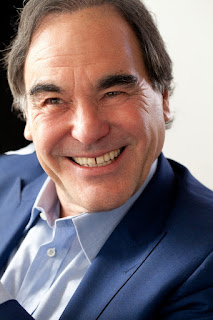 LOS ANGELES – Legendary screenwriter-director Oliver Stone, whose films include Platoon, Born on the Fourth of July, JFK, and Wall Street, is set to receive the Writers Guild of America, West’s 2017 Laurel Award for Screenwriting Achievement in recognition of his extraordinary career and body of work. He will be honored at the Guild’s awards show on Sunday, February 19, 2017 at The Beverly Hilton in Beverly Hills.

“Oliver Stone may be our most committed screenwriter, using an unparalleled sense of conflict and drama to define the past half century,” said WGAW President Howard A. Rodman. “Stone's Vietnam trilogy – Platoon, Born on the Fourth of July, Heaven & Earth – not only illuminated the war, but made us face its consequences. His unofficial and extraordinary history of the 1960s and 1970s – from JFK and The Doors through Nixon and Wall Street – wove a coherent narrative from incoherent facts. His dialogue is always memorable: think of Gordon Gekko's ‘greed is good,’ or Tony Manero's 182 ‘fucks’ in Scarface. But even Stone's most amoral characters are, in the end, like us: all too human. Stone has held a mirror up to our times, and dares us again and again to look at our nation – and ourselves – without turning away.”

“As a young screenwriter I remember seeing so many I admired graced with the Laurel Award, and I never expected I'd be considered their peer. I am most honored to accept this great award,” commented Stone.

Academy Award winner Stone has written and directed nearly two dozen feature films over the course of his career, including some of the most influential and iconic movies of the last several decades.

His trio of acclaimed Vietnam war-era films are informed by his own real-life experience serving in the U.S. Army Infantry in Vietnam in 1967-68, having been wounded twice in combat and ultimately earning the Bronze Star for Valor, Purple Heart, and other medals of honor during his military career. 1987’s Platoon, written and directed by Stone, earned him Academy Awards for Best Director and Best Picture, and an Oscar nomination for Best Writing, Screenplay Written Directly for the Screen, in addition to a Golden Globe for Best Director, a BAFTA Award for Best Direction, and WGA and Golden Globes screenplays noms.

1989’s Born on the Fourth of July (Screenplay by Oliver Stone & Ron Kovic, Based on the Book by Ron Kovic) memorably chronicled Vietnam vet turned anti-war activist Ron Kovic’s personal post-combat struggle as a paraplegic, exploring what it means to be American along the journey. The acclaimed Tom Cruise-starring film earned Stone a pair of Oscars for Best Picture and Best Director, as well as an Oscar nom for Best Writing (Screenplay Based on Material from Another Medium), Golden Globe Awards for Best Director and Best Screenplay, and a WGA adapted screenplay nomination.

The final movie in Stone’s powerful Vietnam trilogy, 1993’s Heaven & Earth (Based on the Books When Heaven and Earth Changed Places by Le Ly Hayslip with Jay Wurts and Child of War, Woman of Peace by Le Ly Hayslip with James Hayslip), follows the harrowing true story of a Vietnamese village girl who survives a life of suffering and hardship during and after the Vietnam war – her own tumultuous relationships with the men in her life providing a potent metaphor for U.S.-Vietnamese political relations.

Stone’s films also include his unconventional view of professional sports, Any Given Sunday (1999, Screenplay by John Logan and Oliver Stone, Screen Story by Daniel Pyne and John Logan), epic historical drama Alexander (2004, Written by Oliver W. Stone and Laeta E. Kalogridis and Christopher Kyle), the timely sequel Wall Street: Money Never Sleeps (Written by Allan Loeb and Stephen Schiff, Based on Characters Created by Stanley Weiser & Oliver Stone), which chronicled the 2008 stock market crash and Gordon Gekko’s fate after prison; the drug cartel dark comedy Savages (2012, Screenplay by Shane Salerno & Don Winslow & Oliver Stone, Based on the Novel by Don Winslow), and most recently real-life political thriller Snowden (Screenplay Kieran Fitzgerald & Oliver Stone, Based on the Book The Time of the Octopus by Anatoli Kucherena; Based on The Guardian Book by Luke Harding), in which Stone explores timely issues of privacy and surveillance through the case of military whistleblower Lt. Edward Snowden, accused of leaking millions of U.S. government documents and now in Russian exile.

Stone’s additional directing credits include World Trade Center (2006), depicting the true story of our nation’s few 9/11 survivors; 2008’s no-holds-barred political biopic W., his satirical skewering of former U.S. President George Bush; and pitch-black thriller U-Turn (1997). He has also produced or co-produced a dozen films, including The People vs. Larry Flynt (1996), The Joy Luck Club (1993), and Reversal of Fortune (1990). On the small screen, Stone shared a 1995 Primetime Emmy Award (Outstanding Made for Television Movie) for executive producing the telefilm Indictment: The McMartin Trial.

His documentaries include a trio of films focusing on late Cuban leader Fidel Castro (2003’s Comandante, 2004’s Looking for Fidel, and 2012’s Castro in Winter), as well as 2009’s South of the Border, featuring Hugo Chavez and six other Presidents in a continent undergoing seismic social changes, and Stone’s tribute to the late Venezuelan leader and personal friend, Mi Amigo Hugo (2014). He also made 2003’s Persona Non Grata, examining Israel-Palestine relations. Stone’s latest work includes the ambitious Showtime doc series, The Untold History of the United States, a monumental, 12-hour interrogation of the conventional “triumphalist” narrative of U.S. history.

Born on September 15, 1946, in New York City, Stone launched his writing career early on, penning his first novel – A Child’s Night Dream – when he was only 19. The book, ultimately published in 1997 by St. Martin’s Press, is set to be adapted and directed by Stone’s own son, Sean. After returning from Vietnam, he completed his undergraduate studies at New York University Film School in 1971. His early jobs included such diverse stints as a taxi driver, merchant marine, messenger, advertising salesman, and, finally, production assistant, which provided a segue to his prolific, celebrated filmmaking career.

Awarded to a Writers Guild member who has advanced the literature of motion pictures and made outstanding contributions to the profession of the screenwriter, past recipients of the WGAW’s Laurel Award for Screenwriting Achievement include Elaine May, Harold Ramis, David Mamet, Tom Stoppard, Paul Mazursky, Lawrence Kasdan, Robert Benton, Barry Levinson, Steven Zaillian, and Eric Roth.

The Writers Guild Awards honor outstanding writing in film, television, new media, videogames, news, radio, promotional, and graphic animation categories. The awards will be presented at concurrent ceremonies on Sunday, February 19, 2017, in Los Angeles at the Beverly Hilton and in New York City at the Edison Ballroom. For more information about the 2017 Writers Guild Awards, please visit www.wga.org or www.wgaeast.org.