Meryl Streep to Receive the "Cecil B. deMille Award" at 74th Golden Globes 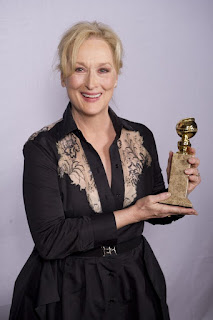 Lorenzo Soria, President of the Hollywood Foreign Press Association (HFPA), made the announcement of Meryl Streep’s honor. Soria stated, "It’s no surprise that the HFPA has chosen Meryl Streep as the recipient of the 2017 Cecil B. DeMille Award. Meryl’s enthralling body of work across a diverse set of genres has made her a role model over the past 40 years, and she will continue to do so for generations to come. She has always taken roles with strong female leads, creating art by showing vulnerability and portraying truth on the big screen. Simply put, she is a trailblazer, having paved the way for women in television, film and stage. For shattering gender and age barriers, all with finesse and grace, the HFPA is humbled to bestow this honor upon her."

For almost 40 years, Meryl Streep has portrayed an astonishing array of characters in a career that has cut its own unique path from the theater through film and television.

Streep was educated in the New Jersey public school system through high school, graduated cum laude from Vassar College, and received her MFA with honors from Yale University in 1975. She began her professional life on the New York stage, where she quickly established her signature versatility and verve as an actor. Within three years of graduation, she made her Broadway debut, won an Emmy (Holocaust) and received her first Oscar nomination (The Deer Hunter). In 2015, Streep was nominated for a Golden Globe Award for her role as The Witch in Into the Woods, marking her 29th recognition by the HFPA. In the same role, she earned her 19th Academy Award and Screen Actors Guild Award nominations. The three-time Academy Award-winner was recently seen in Stephen Frears’ Florence Foster Jenkins.

She is a member of the American Academy of Arts and Letters, and has been accorded a Commandeur de L'Ordre des Arts et des Lettres by the French Government and an honorary César. She received the Lifetime Achievement Award from the American Film Institute, a 2008 honor from the Film Society of Lincoln Center, and the 2010 National Medal of Arts from President Obama. In 2011, Streep received a Kennedy Center Honor, and in 2014 the Presidential Medal of Freedom. She holds honorary doctorates from Yale, Princeton, Harvard, Dartmouth Indiana Universities, the University Of New Hampshire, Lafayette, Middlebury, and Barnard Colleges.