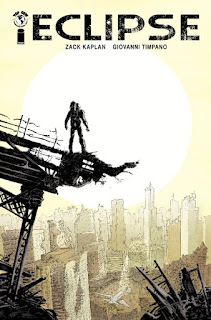 The first four issues collected into trade paperback this February

In the near future, a mysterious solar event has transformed the sun’s light into deadly immolating rays. The world’s few survivors now live in nocturnal cities, unable to survive the daylight hours outdoors. But a killer has emerged who uses sunlight to burn his victims—and when he targets the daughter of a solar power mogul, it falls to a disillusioned solar engineer to protect her.

“ECLIPSE has all the feel of a Raymond Chandler novel. David Baxter is a compelling lead character, hollowed out by the disaster that broke the world and reluctant to be an active participant, not just in the murder investigation but society as a whole.” —IGN

“Kaplan’s story telling style is succinct and the art by Timpano has never been better.” —Word of the Nerd (10/10 overall score)

“This is a story that sees the world re-imagined but still manages to explore the human condition.” —GeekFeed (5/5 overall score)

“Extremely appealing to the eye.” —Bounding into Comics (10/10 overall score)

Posted by Leroy Douresseaux at 4:04 PM