Review: "Justice League vs Teen Titans" Focuses on the Titans 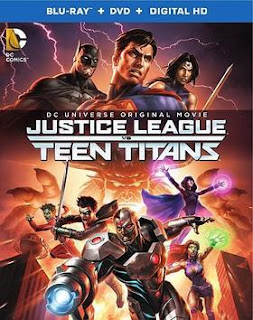 Justice League vs. Teen Titans is a 2016 straight-to-video, animated superhero film from Warner Bros. Animation.  It is the 25th film in Warner's line of DC Universe original animated movies.  The film focuses on select characters featured in the world of DC Comics' Justice League and Teen Titans comic book franchises.

Batman asks his first Robin, Dick Grayson, who is currently known as Nightwing (Sean Maher), to convince Starfire (Kari Wahlgren), the leader of the Teen Titans, to accept Damien into the Titans.  The hope is that being with the Titans will help Damien to learn teamwork, but the youngster's lack of respect for others will make that difficult.  Meanwhile, the Titan known as Raven (Taissa Farmiga) is secretly struggling to keep her father, Trigon (Jon Bernthal), a monstrous and powerful demon, from coming to Earth and destroying it.

Justice League vs. Teen Titans is surprisingly enjoyable.  I thought that I might like it because it features Teen Titans characters and a famous Titan story line that I liked as a young comic book reader.  I have to admit that I also find the Justice League's line-up for this film to be a good one that works as a fighting unit.  The characters also play off one another in a way that makes for good character drama, conflict, and personal relationships.

Justice League vs. Teen Titans is not great, but it is quite good.  I would not mind seeing a sequel.