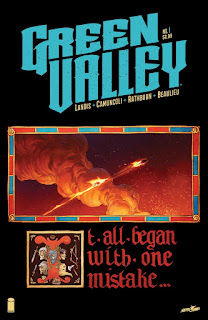 GREEN VALLEY IS A LUSH SUCCESS

Issue #1 immediately sent back to print

Image Comics and Skybound Entertainment are pleased to announce GREEN VALLEY #1—created and written by Max Landis, drawn by Giuseppe Camuncoli, inked by Cliff Rathburn, colored by Jean-Francois Beauliu, and lettered by Pat Brosseau—is being fast-tracked to a second printing in order to keep up with customer demand.

In GREEN VALLEY, nothing is as it seems. The knights of Kelodia are the finest in the land, but they’ve never faced a power like the one that resides in the Green Valley...

ABOUT SKYBOUND
Founded in 2010, Skybound Entertainment is a multiplatform entertainment company specializing in television, comics, film, digital content, interactive, gaming, and merchandise. The company is led by The Walking Dead creator Robert Kirkman and his longtime producing and business partner David Alpert.

Posted by Leroy Douresseaux at 8:29 PM