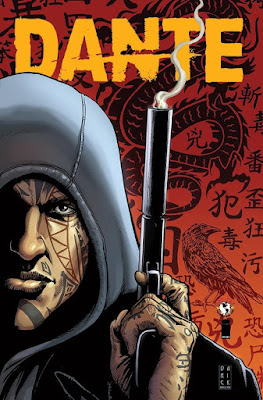 Dante was a family man with a wife and a young daughter—and also a top assassin working for an international crime syndicate. For two decades, he worked hard to keep those two lives separate. Manipulated into thinking he could retire with the syndicate's blessing, Dante is betrayed. While fighting to save himself, he accidentally kills a young Asian boy—an act which changes him forever. Cursed, and covered with otherworldly tattoos, Dante embarks on a journey to uncover the source of this supernatural affliction, and to save his family.

"When Cryptozoic and Strange Turn asked if I'd be interested in working on a book with Darick Robertson, I had to pinch myself at first to see if I was dreaming it," said Hawkins. "Darick is one of those artists that writers dream of collaborating with, and working with him was one of my most fulfilling experiences in comics thus far!"

"Working with Matt, Jason, and the whole Cryptozoic team was an excellent experience,” said Robertson. "The script is moody and gritty, which fit nicely into my artistic wheelhouse. The colors are by the ever incredible Diego Rodriguez, and I believe this is some of our best work to date."

Posted by Leroy Douresseaux at 5:02 AM