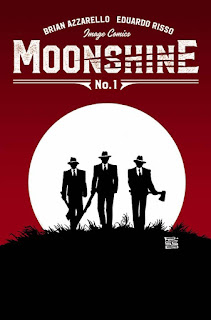 “As darkly beautiful and engrossing as you'd expect from Azzarello & Risso…with a kick as strong as the best corn liquor.”
—Jason Aaron

Image Comics is pleased to announce that author Brian Azzarello (ALPHA KING) and artist Eduardo Risso, the New York Times bestselling, Eisner Award winning creative team that redefined the crime genre with 100 Bullets, have served up another hit with MOONSHINE. The first issue is being rushed back to print in order to keep up with increasing customer demand.

Set during Prohibition, and deep in the backwoods of Appalachia, MOONSHINE #1 tells the story of Lou Pirlo, a city-slick “torpedo” sent from New York City to negotiate a deal with the best moonshiner in West Virginia, one Hiram Holt. What Lou doesn’t figure on is that Holt is just as cunning and ruthless as any NYC crime boss. Because not only will Holt do anything to protect his illicit booze operation, he’ll stop at nothing to protect a much darker family secret...a bloody, supernatural secret that must never see the light of day… or better still, the light of the full moon.

“Shows Azzarello at what he does best, kicking ass and taking names… You won’t be disappointed.” —Fangoria

“When a blockbuster creative team  reunites to work on a new project, the results are often magic. That is the case in Moonshine.” —TFAW.com blog

“As darkly beautiful and engrossing as you'd expect from Azzarello & Risso… with a kick as strong as the best corn liquor.”
—Jason Aaron

"Azzarello and Risso go for the jugular with Moonshine's bloody tale of bootleggers, gangsters, and monsters both human and inhuman. But the silver bullet here is Risso's elegant use of color. Already a master of black and white, he somehow makes his art even creepier and more unsettling.” —Cliff Chiang

"The moody and tense storytelling Azzarello and Risso got famous for in 100 Bullets only increases with Moonshine. And with Risso doing his own coloring, his art has never been more seductive. More addictive than forbidden booze.” —Fábio Moon

"Moonshine delivers the goods, gets the readers hooked and craving for more. Azzarello and Risso did it again!”  —Gabriel Bá

"Gangster noir, mysterious horror, and a dash of southern gothic by two masters of the craft, and the special magic that ignites when they work together. With bold and brazen writing by Brian Azzarello and crisp, delectable art and color by Eduardo Risso, Moonshine is an intoxicating brew. Drink up!" —Karen Berger, DC’s Vertigo imprint founder, Editor on Surgeon X

“Incredible art and writing from two of the best creators in comics. Plus two of my favourite subjects… booze and werewolves all in one book! A winner!” —Tula Lotay

“Moonshine brings me back to that first time reading an Azzarello and Risso book. And Risso coloring himself adds a stark new beauty.”
—Ivan Brandon

“A dark and unrelenting story that will suck you into another time and place. It’s Miller's Crossing meets Deliverance. Azzarello and Risso bring the goods as they always do!” —Amy Chu

“Moonshine by Azzarello & Risso for Image Comics is a book that makes me wish I had thought of it first!! RECOMMENDED!”  —Francisco Francavilla

Posted by Leroy Douresseaux at 4:51 AM