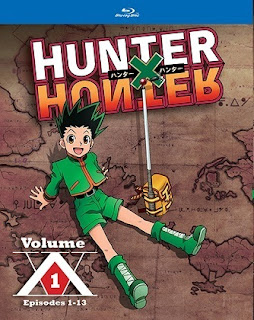 The upcoming release will feature the first-quarter of Season 1 and will be available as Standard Edition Blu-ray and Standard Edition DVD sets that each contain 13 uncut episodes along with many never-before-seen extras. Uncut English dubbed as well as Japanese subtitled dialogue options are available on both formats. A HUNTER X HUNTER Set 1 Steelbook™ Edition will be available exclusively in the U.S. from Best Buy. HUNTER X HUNTER is rated “TV-14.”

In the HUNTER X HUNTER anime series, abundant riches, hidden treasures, fearsome monsters, and exotic creatures are scattered around the world... Gon departs on a journey to become an elite Hunter who risks his life in search of the unknown. Along the way, he meets other applicants for the Hunter exam: Kurapika, Leorio, and Killua. Can Gon pass the rigorous challenges of the Hunter exam and become the best Hunter in the world!? His wild and epic journey is about to begin!!

“HUNTER X HUNTER combines vivid animation, strongly developed characters and an action-driven storyline that captivates audiences from the very first episode,” says Charlene Ingram, Senior Marketing Manager, Animation. “The series has thrilled fans across North America on Toonami and we are very excited to now announce the home media release. Catch all the fun and action this October!”

In the original HUNTER X HUNTER manga series, which is also published by VIZ Media (rated ‘T’ for Teens), Hunters are a special breed, dedicated to tracking down treasures, magical beasts, and even other people. But such pursuits require a license, and less than one in a hundred thousand can pass the grueling qualification exam. Those who do pass gain access to restricted areas, amazing stores of information, and the right to call themselves Hunters.

For more information on HUNTER X HUNTER or other anime and manga titles available from VIZ Media, please visit www.VIZ.com.