I Reads You Review: POWER MAN AND IRONFIST #1 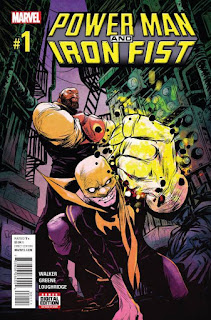 “The Boys are Back”

Luke Cage, also known as “Power Man,” is a Marvel Comics superhero.  He was created by writer Archie Goodwin and artist John Romita, Sr., and first appeared in Luke Cage, Hero for Hire #1 (cover dated: June 1972).  Cage was imprisoned for a crime he did not commit, but he eventually gains superpowers in the form of durability, unbreakable skin, and superhuman strength.

Iron Fist/Daniel “Danny” Rand is a Marvel Comics superhero.  The character was created by writer Roy Thomas and artist Gil Kane, and first appeared in Marvel Premiere #15 (cover dated: May 1974).  An orphan and martial artist, Danny earned the power of a mystical force called the Iron Fist in the also mystical city of K'un Lun.

Power Man and Iron Fist #1 (“The Boys are Back”) opens with Luke and Danny on their way to meet Jennie Royce.  The former office manager of Heroes for Hire, Jennie has finished serving a prison sentence for murdering her abusive ex-boyfriend, Eugene Mason.  Jennie asks Luke and Danny to retrieve a family heirloom currently in the possession of a criminal, Lonnie Lincoln a.k.a. “Tombstone.”  Luke is adamant that he is not re-teaming with Danny Rand and that this mission to retrieve Jennie's heirloom is just a favor for a friend-who-is-like-family in need.  But, of course, it is not the easy.

One look at Sanford Greene's cover art for this new Power Man and Iron Fist #1, I knew that I would not like what was behind the cover.  I was wrong.  I really liked this first issue, and I am genuinely suspicious or ambivalent about first issues.

David Walker's story and script is off-beat in a way that makes this comic book stand out from the Marvel pack, in a way that Matt Fraction and David Aja's Hawkeye did.  Sanford Greene's visual language for this comic book balances superhero action against an edgy kind of street-comedy and gritty drama that pushes back on easy classification.

I like this comic book, and I look forward to future issues.  Besides, David Walker and Sanford Greene are the Black/African-American creative team I have been demanding, so I gots to keep it real and read this comic book for several issues, at least.  So far, it looks like their work will help to choke the Jim Crow out of the American comic book industry

Posted by Leroy Douresseaux at 3:54 PM