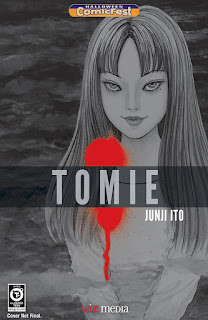 Held annually, Halloween ComicFest will be celebrated on Saturday, October 29th, 2016 at scores of comic shops and retailers nationwide on Halloween or the Saturday just before Halloween. On this day, participating shops offer fans and visitors FREE Halloween ComicFest samplers filled with previews of exciting upcoming titles. For additional information and a list of participating retailers, please visit: www.HalloweenComicFest.com.

Tomie Kawakami is a femme fatale with long black hair and a beauty mark just under her left eye. She can seduce nearly any man, and drive them to murder as well, even though the victim is often Tomie herself. While one lover seeks to keep her for himself, another grows terrified of the immortal succubus. But soon they realize that no matter how many times they kill her, the world will never be free of Tomie.

TOMIE is scheduled to debut on December 20th, 2016 as a hardcover Complete Deluxe Edition published under the VIZ Signature imprint.

Manga creator Junji Ito made his professional debut in 1987 and has gone on to be recognized as one of the greatest contemporary artists working in the horror genre. His critically acclaimed titles include TOMIE and UZUMAKI, which were adapted into critically praised live-action films, as well as GYO, which was adapted into an animated feature film. UZUMAKI, GYO and Ito’s celebrated manga short story anthology, FRAGMENTS OF HORROR, are published in English by VIZ Media in deluxe hardcover editions available under the VIZ Signature imprint. Ito’s influences include classic horror manga artists Kazuo Umezu and Hideshi Hino, as well as authors such as Yasutaka Tsutsui and H.P. Lovecraft.