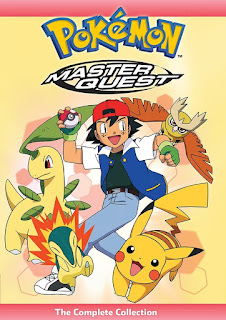 For the first time, fans will be able to own the complete POKÉMON: MASTER QUEST season in a special 7-disc DVD set. Revisit the adventures of Ash, Pikachu and friends on their adventures across the Johto region and beyond.

With the Olivine City Gym temporarily out of commission, our heroes are off to the Whirl Cup Competition—and Misty wants in on the action! Resuming their journey, they find that Jessie, James, and Meowth aren’t the only members of Team Rocket they need to worry about, though that dastardly trio still has a few tricks up their collective sleeve. After a heated battle with the final Gym Leader, Ash moves on to the Silver Conference, but does he have the mettle to take on his old rival, Gary?

For additional information on POKÉMON as well as other anime and manga titles distributed and published by VIZ Media, please visit www.VIZ.com.