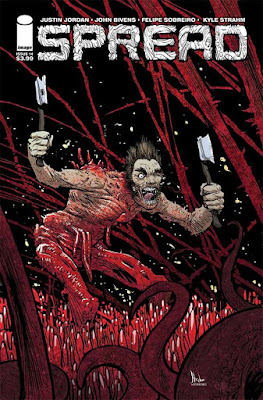 Previously in SPREAD, Jack and Molly struggled to save No's life as enemies new and old came at them from all sides.

In SPREAD #14, No and company have found a place where civilization seems to have survived and where safety can be found. Is it too good to be true? Also, starting this issue: a special four-part series of interlocking covers by co-creator KYLE STRAHM!

"Pretty sure my cover has the largest nipple ever on the front of an Image comic,” added Bivens.

"The work John has been doing on this arc is right in line with the spirit of SPREAD,” said co-creator and original artist Kyle Strahm. “He puts the juice in all the right places."

"Much like the Spread itself, we've been hidden underground, extending our carrion tentacles and getting ready to grab people when they least expect it...” said Sobreiro. “Wait, I shouldn't have warned you just now. CRAP!”

Posted by Leroy Douresseaux at 7:04 PM