I Reads You Review: SQUADRON SUPREME #1 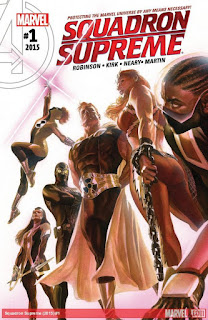 The Squadron Supreme is a Marvel Comics superhero team.  Created by writer Roy Thomas and artist John Buscema, the group first appeared in a story arc that was published in Avengers #85–86 (cover dated: February to March 1971).  The Squadron Supreme's membership was initially based on DC Comics' characters.  The core members of the Squadron Supreme were Hyperion (Superman), Nighthawk (Batman), Doctor Spectrum (Green Lantern), Power Princess (Wonder Woman), and the Whizzer (Flash).

Throughout its history, the Squadron Supreme has made sporadic appearances in various Marvel Comics titles.  For a time, the group's most memorable run came in Squadron Supreme, a 12-issue miniseries, published from mid-1985 to mid-1986 and written by the late Mark Gruenwald.

With the advent of the All-New, All-Different Marvel, the Squadron Supreme returns in a new ongoing comic book series, featuring, in some cases, alternate version of the characters that comprised the group's core membership.  Squadron Supreme is written by James Robinson; drawn by Leonard Kirk (pencils) and Paul Neary (inks); colored by Frank Martin; and lettered by Travis Lanham, with covers by Alex Ross.

Squadron Supreme #1 opens eight months after the destruction wrought by events depicted in the nine-issue miniseries, Secret Wars.  Hyperion (Marcus Milton of Earth 13034), Nighthawk (Kyle Richmond of Earth 31916), Doctor Spectrum (of Earth 4290001); Power Princess (Zarda Shelton of Earth 712), and Blur (Jeff Walters of Earth 148611) have gathered as the Squadron Supreme.  Their first move is to exact revenge against the man they hold responsible for the destruction of their worlds, Namor.  Their next move will put many on Earth on edge.

I was a few pages into this comic book when it became obvious that it was not for me.  I knew that it was unlikely that I would read another issue unless someone gave me a hard copy, because I could not see bothering to read a digital copy.  It looks as if writer James Robinson is trying to recreate Warren Ellis' brilliant Wildstorm comic book, The Authority, but without a sense of humor.

There is nothing that inker Paul Neary can do for Leonard Kirk's pencils, which are... average; I don't think another word is more appropriate.  This comic book is not awful.  It's just average – there goes that word again.