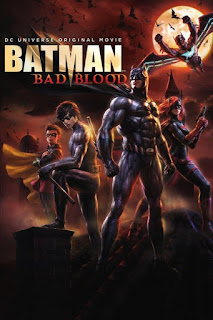 Batman: Bad Blood is a 2016 straight-to-video, animated superhero film from Warner Bros. Animation.  It is the 24th film in Warner's line of DC Universe original animated movies.  The film focuses on characters featured in the world of DC Comics' Dark Knight Detective, the Batman.

A sequel to 2015's Batman vs. Robin, Bad Blood finds members of Batman's family, as well as heroes inspired by him, searching for Batman after he goes missing.  This “Bat Family” however, begins to suspect that their “father” is connected to a new crime wave.

Early in Batman: Bad Blood, a new hero calling herself Batwoman (Yvonne Strahovski) battles a group of costumed supervillains:  Electrocutioner, Firefly, Killer Moth, and Tusk, in a Gotham City warehouse-type facility.  Batman (Jason O'Mara) arrives to join the fray, but the apparent leader of the criminals, a man called the Heretic (Travis Willingham), manages to donate explosives in the facility.  Although Batwoman escapes, she does not believe that Batman did.

Together, Dick and Damien become the new Batman and Robin, and with the help of Batwoman and her alter-ego, Katherine Kane, begin to defend Gotham while searching for Batman.  The truth of Batman's disappearance, however, is far darker and closer to them than the Bat-allies realize.  They will need the help of a new Batman-inspired hero, Batwing (Gaius Charles), to save the day.

Batman: Bad Blood is not the best Batman straight-to-video animated film, nor is it the worst.  The first act, and the last 20 minutes of the film are excellent, so I would say that Bad Blood is on the better side of the Batman animated movies.

I also have to say that the fight scenes are probably the best that I have ever seen in an animated superhero movie.  The individual fisticuffs between pairs of adversaries are comparable to the fighting in live-action martial arts movies.  The aerial battles between characters with the power of flight (because of the costumes and super-suits they wear) are impressive, even dazzling in some places.  The action set pieces, in general, are quite good, especially the one involving that unique Wayne Tech conference building which occurs in the last acts of this movie.

I think the middle of Batman: Bad Blood sometimes comes across as padding, and a little of it does a little to advance the narrative.  Still, it is a good film, but I will say that it is time to move on from the subject matter and plot lines that have dominated the three most recent Batman animated movies, Son of Batman, Batman vs. Robin, and now Batman: Bad Blood.

Posted by Leroy Douresseaux at 4:46 AM