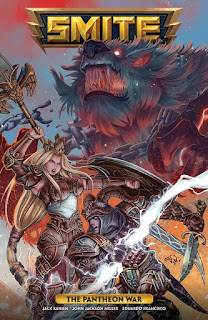 The online game “SMITE: Battleground of the Gods” comes to comics

It is an age where gods live among the mortals over which they rule. The worship of mortals is needed by the gods to maintain their divinity—but the number of gods has swelled, and there are fewer mortal faithful for the individual gods in each pantheon. Only the gods who maintain worshipers will survive, and so tensions are rising among the pantheons. There is an uneasy peace…but peace is not desired by all!

Praise for SMITE: Battleground of the Gods:

“Decidedly different gameplay, a quirky and lighthearted take on classic mythology, and a variety of interesting modes.”—Game Informer

“Makes the MOBA more approachable with smart tweaks to the formula and action RPG-inspired combat.”—PC Gamer


About Hi-Rez Studios
Atlanta-based Hi-Rez Studios was established in 2005 to create exceptional online interactive entertainment, and is now one of the largest video game studios in the Southeast United States. Its games include the squad-based shooter Global Agenda, the critically acclaimed Tribes: Ascend and SMITE, the Battleground of the Gods which has over 14 million players worldwide. Hi-Rez Studios recently launched their first mobile game Jetpack Fighter, a swipe-to-attack high speed platformer with gear progression and is currently developing Paladins, a fantasy FPS with progression using collectible cards. www.HiRezStudios.com.

Posted by Leroy Douresseaux at 4:53 AM