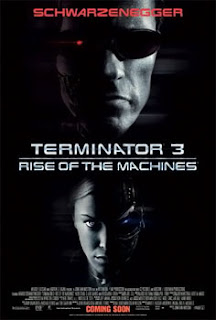 Terminator 3:  Rise of the Machines is a 2003 science fiction and action film from director Jonathan Mostow.  It is the third film in the Terminator film franchise.  In this film, Schwarzenegger's Terminator travels from a post-apocalyptic future to the present in order to protect 19-year-old John Connor and his future wife from a new and more lethal female Terminator.

So is it as good as T2?  Honestly, I wasn’t all that crazy about Terminator 2: Judgment Day.  Sure, the special effects were eye popping at the time; it was like watching actual, real magic on a movie screen.  There were many scenes that I liked, but overall, T2 seemed like some Gothic and ponderous beast, not at all like the lean and hungry fighting machine that was The Terminator, the original and still the best.  But rest assured, a good time is to be had in Terminator 3: Rise of the Machines.

John Connor (Nick Stahl), the future savior of mankind in its war against the machines, is now 18.  In the nearly six years that have passed since the omnipresent Skynet sent a T-1000 to kill him and his mother, Connor has dropped out of society.  He’s off the grid:  no phone, no job, no credit card, and no home.  Judgment Day (originally set to occur in 1997), the day that the machines were supposed to launch nuclear war on humanity, has passed, and nothing happened.

John’s still afraid that something is going to happen.  He’s grown weary of his mantle when suddenly a T-X (Kristanna Loken), a female terminator, comes through time.  Vastly superior to previous terminators, the T-X is programmed not only to kill John but a future lieutenant, Kate Brewster (Clair Danes), as well.  Right behind her is the T-850 (Arnold Schwarzenegger), a replica of the terminator that saved his life as a boy, but this new model is holding dark and shocking secrets deep in its computer brain.

I have to give credit to director Jonathan Mostow (U-571) and the screenwriters for going for the jugular.  T3 is a wall to wall cartoon, occasionally it’s all balls out.  Not only is it so very cartoon like; it’s has the kind of outrageous and over the top stunts and action scenes that usually drawn by the best comic book artists.  Mostow lavishes mayhem and destruction with an attention to detail when it comes to delineating the rubble and fallout from destroyed buildings and cars.  I don’t think destruction has had such chaos and beauty since the Japanese animated film (anime) Akira.  In terms of shootouts, car chases, explosions, and bloody, gore-filled deaths, this is one of the fanciest, grandest B-movies ever made.  It so fun because you don’t have to think, but the movie is still good enough to hold your attention.  As insane as the pandemonium of T3 is, it’s not strained and forced like the disabled anarchy of Charlie’s Angels: Full Throttle.

T3 is certainly not as thoughtful as its predecessors, being relatively philosophy free.  This time Arnold’s terminator is grimmer, darker, and more determined to follow his programming regardless of the feelings of the humans he has to protect, even those of his charge John.  Ms. Loken makes a fearsome T-X, and she certainly has moments when she could scare Dracula.  However, I found that her beautiful face made her seem a little too much like candy, more tart than dangerous.  The T-X is so powerful that it’s hard to believe that it could not carry out its programmed task.  Nick Stahl is an excellent John Connor, beset by doubts and fearful of the future.  Ms. Danes has her moments, but it takes awhile for her to warm up to the part.

Still, even the rough spots can’t take the fun out of this crazed trip of non-stop violent action.  Sometimes hilarious, often breathtaking, and thrilling from end to end, T3 fits right in with the other Terminator films, and it’s a hoot to boot.


The text is copyright © 2015 Leroy Douresseaux. All Rights Reserved. Contact this blog for reprint and syndication rights and fees.

Posted by Leroy Douresseaux at 8:53 PM