Sabrina Faces the Witches' Council In "Sabrina 5," Due Wed., May 18th 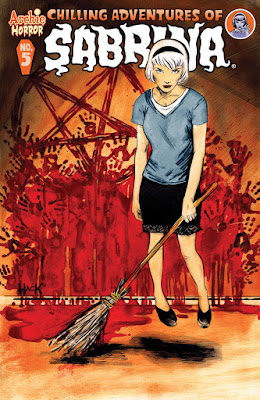 Sabrina has to face the Witches Council for an accusation of conspiring with a mortal against the Church of Night. It will take a series of unnatural tests to prove her innocence, but none of it will bring her beloved Harvey Kinkle back. She’ll have to take matters into her own hands to find Harvey’s missing soul. Recruiting two other young witches (from a neighboring coven), Sabrina holds a séance, but as ever, Madame Satan is pulling the strings behind the scenes, and what Sabrina taps into is much more dangerous—and diabolical. And will send our beloved teen witch on an epic quest. For TEEN+ readers.