Review: Denzel Does Good Guy/Dark Side in "The Equalizer" 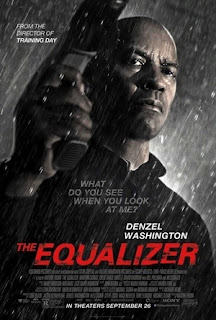 The Equalizer is a 2014 action movie and crime thriller from director Antoine Fuqua and starring Denzel Washington.  The film is based on the television series, “The Equalizer,” which was created by  Michael Sloan and Richard Lindheim and was originally broadcast on CBS from 1985 to 1989.  The Equalizer the movie focuses on a man with a mysterious past who helps a young female prostitute, which brings him into conflict with her owners, ultra-violent Russian gangsters.

The Equalizer introduces Robert “Bob” McCall (Denzel Washington), a man who lives quietly in Boston, Massachusetts, where he works at a “Home Mart” hardware store.  McCall spends his nights at the Bridge Diner where he has befriended Teri (Chloë Grace Moretz), a young call girl who also wants to be a pop singer.  She is pimped out by local Russian gangsters that are led by a man named Slavi (David Meunier).

After Slavi beats Teri into a coma, McCall attempts to rescue her from Slavi.  The aftermath of that meeting brings Teddy Rensen (Martin Csokas) to Boston.  Rensen is the enforcer/fixer for Russian mafia leader, Vladimir Pushkin (Vladimir Kulich), but McCall decides to do some fixing of his own.

The Equalizer is a thoroughly satisfying movie... at least to me.  I guess that I should qualify this review by admitting that I am a huge fan of Denzel Washington, whom I consider to be one of the world's best actors of the last three decades.

Since his Oscar-winning turn in 2001's Training Day, Washington has proven to be a capable bad guy.  With 2010's Book of Eli, Washington showed that he could be a bad-ass, kick-ass, action hero with fancy martial arts-styled moves.  Ostensibly the hero in The Equalizer, Washington mixes bad guy with bad-ass in Robert McCall.

The screenplay by Richard Wenk has McCall constantly in peril or makes it seem as if he were in danger even when he is not.  Director Antoine Fuqua plays that for everything he can get out of it.  He makes a crime film that moves like an action movie, and Fuqua makes everything so tense that he fashions a thriller that strengthens the crime and action movie elements.

And Denzel glides through it all with lethal inevitability and assurance, so much so that I have to give special credit to actor Martin Csokas.  He delivers the kind of performance that makes Teddy Rensen an adversary who is a believable threat to Robert McCall.

The Equalizer is a game of death that is hard to stop watching, even if it is light on story and character development (which would have made this movie a classic).  I was a big fan of the original television series, which I have not seen in years, and therefore, remember little of it.  I do remember that the series did delve into character.  Well, the recent announcement of a sequel to this film means that there could be improvement on the character front.  In the meantime, take time to enjoy a slick and stylishly violent movie, The Equalizer.

Posted by Leroy Douresseaux at 9:55 AM