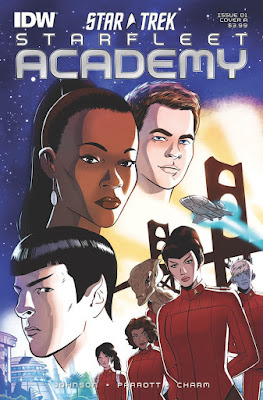 This October will see the release of Star Trek #50, marking one of the longest-running Star Trek comic-book series by any publisher. Mike Johnson continues his stint with this special anniversary issue that kicks off an epic, three-part adventure that will introduce the classic “Mirror/Mirror” storyline into the new film-based universe. Issue #50 will also boast additional bonus content, including behind-the-scenes looks at the entire 50-issue run, along with hints about where the series is going. It will all be surrounded by a gorgeous wraparound cover by series artist Tony Shasteen.

In December, IDW is adding a new dynamic to Star Trek lore with the debut of a new miniseries, Star Trek: Starfleet Academy. The comic follows Kirk, Spock, Uhura and some surprise faces while they are still cadets-in-training at Starfleet Academy, set in the period just prior to the opening of the 2009 mega-hit film. At the same time, you’ll meet the all-new “current day” class of Starfleet cadets, full of compelling young characters from all over the galaxy. The past and the present collide when a mystery bridges the two timelines. This vibrant series, designed to be an entry point for diverse groups of readers, is written by Mike Johnson and Ryan Parrot, with art by fan-favorite creator Derek Charm.

“IDW is proud to have been partnered with Star Trek for nearly a fifth of its lifespan so far,” said IDW Editor-In-Chief Chris Ryall. “As these new comic book projects, and many others coming soon, will show, we’ve got plenty of exciting new ways to bring Star Trek stories to the fans.”

“The fan enthusiasm surrounding Starfleet Academy, much like Harry Potter’s Hogwarts, or X-Men’s Xavier’s School for Gifted Youngsters, shows that the educational lives of our most beloved heroes makes for fantastic stories,” said IDW editor Sarah Gaydos. “I am so excited to flesh out a new chapter in the lives of the Enterprise crew, while introducing you to a great new team of recruits – – ready to boldly go!”

Join Mike Johnson, Derek Charm and Sarah Gaydos at SDCC on Friday, July 10 (4PM-5PM) for the IDW: The Best Panel On Recorded History where they will discuss these Star Trek projects and more.

Posted by Leroy Douresseaux at 4:33 AM