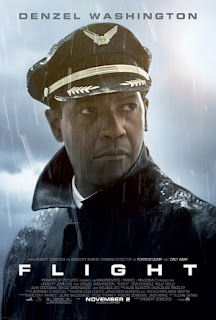 The subject of this movie review is Flight, a 2012 drama from director Robert Zemeckis.
The film focuses on an airline pilot who saves almost all his passengers on his malfunctioning airliner, which eventually crashes, but an investigation into the accident reveals something troubling.

In the film, SouthJet Flight 227 is heading to Atlanta from Orlando, when something goes terribly wrong.  Veteran airline Captain William “Whip” Whitaker (Denzel Washington) manages to keep the crash from being a complete and total disaster.  Suddenly, Whip is a hero, but questions begin to arise when he avoids the spotlight.  Meanwhile, the investigation by the NTSB (National Transportation Safety Board) into the Flight 227 accident reveals something troubling.

Flight has an Oscar-winning director in Robert Zemeckis (for Forrest Gump).  However, Flight's Oscar-nominated screenplay by John Gatins is a blistering character study of a man whose talents (as a highly skilled airplane pilot) fully come to light at the same time as the most troubling aspect of his personality (his alcoholism) begin to come to light.  As a character study, the film script provides Denzel Washington with the opportunity to give one of his best performances of the last decade.

Zemeckis guides all the actors through this thoughtful and provocative character study, but Washington is the primary focus.   Whip Whitaker is a meaty role, and the film takes him on a harrowing personal journey.  Washington does not shy away from being intimate with the stage, camera, and audience as he pulls all the mess and addiction out of the tortured Whip for the audience to see.  It is good to see an African-American actor get the chance to be so vulnerable and revealing to movie audiences.  Washington deserved the Oscar nomination he received for his performance here.

Flight is an excellent return to live-action film for Zemeckis.  He is flawless in the way he captures Washington's grand performance and Whip Whitaker's journey towards redemption and maybe, salvation.  Flight should be a blueprint for high-quality film drama.

Posted by Leroy Douresseaux at 9:55 AM